ADLcare combines wearable technology with machine learning to unlock powerful new insights for seniors, their family members, and their caregivers. Our system provides continuous, connected reporting of vitals, daily activities, and emergency events, and helps identify trends so long-term care decisions can be made with confidence. 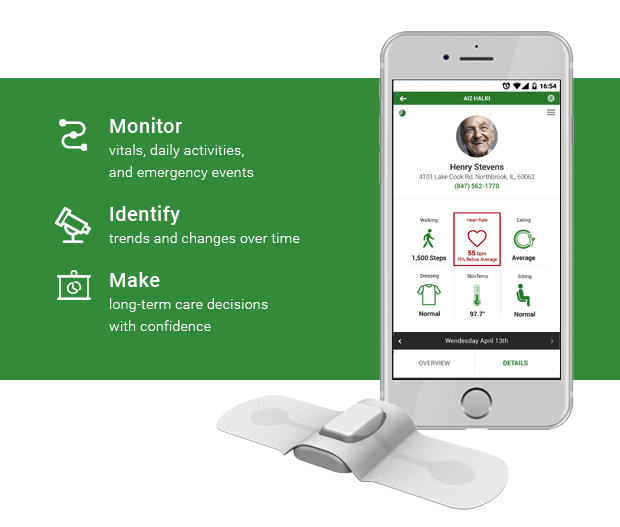 The result: a connected health solution that facilitates continued independent living, and offers peace of mind for seniors, their loved ones, and their caregivers alike.

The United States is in the midst of one of the most significant demographic shifts in the history of our country. As the Baby Boomer generation (those born between 1946 and 1965) starts to enter their 70s, and medical innovation allows people to lead longer and healthier lives, the population of our country is growing older by the year.

According to numbers provided by the Population Reference Bureau, the number of Americans ages 65 and older is projected to more than double from 46 million today to over 98 million by 2060. 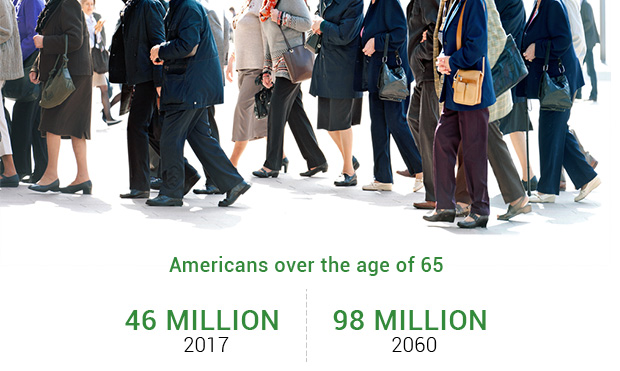 This shift has real and profound implications for millions of lives within our country -- not just for seniors themselves, but for those who care for them as well.

Care for elderly loved ones is a growing concern for younger Americans, with approximately 34.2 million people in the United States engaged in care for a loved one age 50 or older as of 2015, according to information provided by the the National Alliance for Caregiving and AARP. Many of those responsible for the care of an aging loved one are doing so while balancing career and parenting at the same time.

As the population ages, home care providers are becoming an increasingly important part of the healthcare landscape. Already today there are more than 12,000 home care agencies in the United States, and home care is expected to become a $500B+ industry by the year 2025. But home care providers typically spend only a few hours per week with each client, leaving stretches of time where seniors may be unaccompanied -- time when potentially vital details might fall through the cracks.

Studies have shown that living at home helps the elderly live longer and happier lives. Remaining independent offers dignity, keeps people in their community of comfort, and makes possible a greater a quality of life. But the elder care community needs solutions that facilitate continued independence, while providing the security and assurance that seniors and their loved ones need to feel confident in their decision to remain in their homes.

Enter ADLcare™. With ADLcare, the Algorithmic Intuition team has developed a smart, compassionate, tech-forward solution that perfectly addresses the needs for stakeholders across the senior care continuum.

ADLcare: There when you can’t be.

The ADLcare system consists of three parts: a wearable device for data acquisition,  an algorithm detecting the ADLs, and an app or dashboard for visualization. Together, they form a comprehensive solution designed to provide  caregivers and family members with the information they need to make informed care decisions -- without intruding on or diminishing the loved one’s care and wellbeing.

ADLcare Monitor
The ADLcare Monitor is a small, unobtrusive device that is worn on the body under a special bandage designed for gentleness. The monitor tracks a variety of metrics divided into three main categories -- Movement, Vitals, and Activities of Daily Living (ADLs) -- and transmits the data to the ADLcare dashboard and app.

ADLcare Dashboard & App
ADLcare offers peace of mind by providing data insights to both families and caregivers via a streamlined app and dashboard. Subscribers can view day to day reports on vitals and activities to inform care decisions, as well as receive immediate notification in case of an emergency. 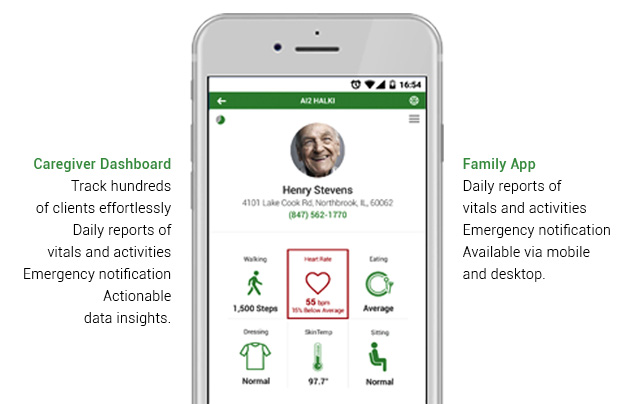 ADLcare™ Algorithm
Underlying the ADLcare system is Algorithmic Intuition’s proprietary neural network software. Using sophisticated machine learning algorithms, ADLcare has the ability to track and recognize patterns in seniors’ activity and behavior over time. For example, if the wearer is sleeping longer, or moving around less, ADLcare has the ability to recognize that shift and bring it to the attention of family members and caregivers, so that they can make a plan to seek appropriate medical intervention.

ADLcare is not a medical product, and is not meant to replace consultation with a healthcare professional as the primary point of care. But with increased visibility and enhanced insights into seniors’ activities and patterns, seniors, their loved ones, and their caregivers can be empowered to make important care decisions with confidence.

In June 2017, we launched a controlled beta of our first generation product in partnership with a home care provider (HCP), who is offering the ADLcare solution to their clients.

Up next for Algorithmic Intuition: we are moving forward with Generation 2 of the ADLcare wearable, with a plan to launch in October 2017. Updates to the Gen 2 product will include: 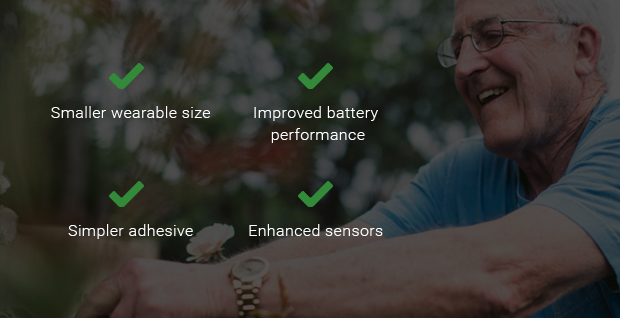 For more information about the future of ADLcare and how you can be involved, please request access to the business plan tab of this profile. Our team looks forward to speaking to you!

The Algorithmic Intuition team has been working together for years to pioneer the use of sensors to detect user context and intent. We have deep expertise in sensor algorithms and consumer products, which we have already put to work to build one successful company: Sensor Platforms Inc (SPI), which was acquired by Audience Inc in 2014.

Our team worked together for over five years at SPI, developing powerful, embedded, machine-learning algorithms for the mobile industry. Now, we thrive to build on that technology through further innovations and put it to use to help families everywhere care for their loved ones with dignity, compassion, and grace. 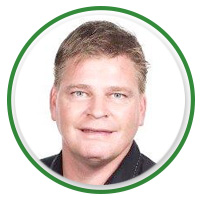 Dan Brown | CEO / Founder
Dan is a highly accomplished, competent, goal-driven, and seasoned executive in the areas of sales and marketing, corporate development, market strategy ,business development, client acquisition and strategic business planning. He has demonstrated more than 25 years of broad-based experience in building business from the ground-up and developing and implementing corporate strategies via business development and team building.  Dan was CEO of Sensor Platforms Inc from 2010 until its acquisition by Audience Inc in 2014. Before that he was Technology Partner at Arrowpath Venture Partners for 10 years and where he lead the investment in Sensor Platforms. Previously he has been VP of Engineering, of Marketing and of Business Development across companies such as Ceon, CenterPoint Broadband, Mayan Networks, First World Communications and British Telecom. 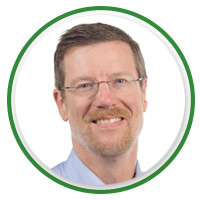 Kevin Shaw, Ph.D. | CTO / Founder
Kevin is a lifelong entrepreneur with a deep love of technology.  He has strong experience in startups, semiconductors, business development, product development and team building.  He has a PhD in EE/MEMS from Cornell University, a Masters in Management from Stanford University’s Graduate School of Business and 30 U.S. Patents in MEMS and algorithms.  He is also Adjunct Faculty at Singularity University for MEMS, Sensors and IOT. Kevin was CTO of Sensor Platforms Inc from 2009 until its acquisition by Audience in 2014. Before that he established the Sensor Algorithms team and ran Business Development. Previously, he co-founded his first company soon after college (sold in 2004) and worked at Kionix Inc, a MEMS semiconductor foundry as its 3rd employee (acquired in 2000).

John Tingleff | CFO
John has 20 years experience in the financial and operations management of early stage technology companies. Prior to joining Algorithmic Intuition, he worked at Sensor Platforms, where he guided the company to a successful acquisition by Audience Inc. Prior to that, John was CFO of Ceon Corporation where he led the successful restructuring of this OSS software company. After restructuring, Ceon became the dominant supplier of provisioning and activation systems to the cable TV industry for Internet and IP phone access.Previously he served as CFO of Mayan Networks, a telecommunications, multi-service provisioning platform provider. At Mayan Networks, John raised $90 million in equity from top tier venture capitalists and $75 million in convertible debt led by Fidelity. John has also been a Partner with Technology Funding, a venture capital firm. He holds an MA and BA in Economics from San Francisco State University.

Rian Sanderson | Co-Founder
Rian has been leading technology teams and bringing products to life for more than ten years. He has expertise in developing and managing software across the entire IOT ecosystem from hardware up to the cloud. Before co-founding Algorithmic Intuition, Rian worked at Sensor Platforms, pioneering sensor based systems for deciphering user context. He went on to lead the audio software commercialization team at Audience/Knowles after the Sensor Platforms Acquisition. Rian's career began in software engineering at Texas Instruments and spanned several startups where he worked on WiFi, GSM radios, deeply embedded systems, and low level Linux/Android. He earned an MS in Software Engineering from Carnegie Mellon and a BS in Computer Engineering from Cal Poly San Luis Obispo.