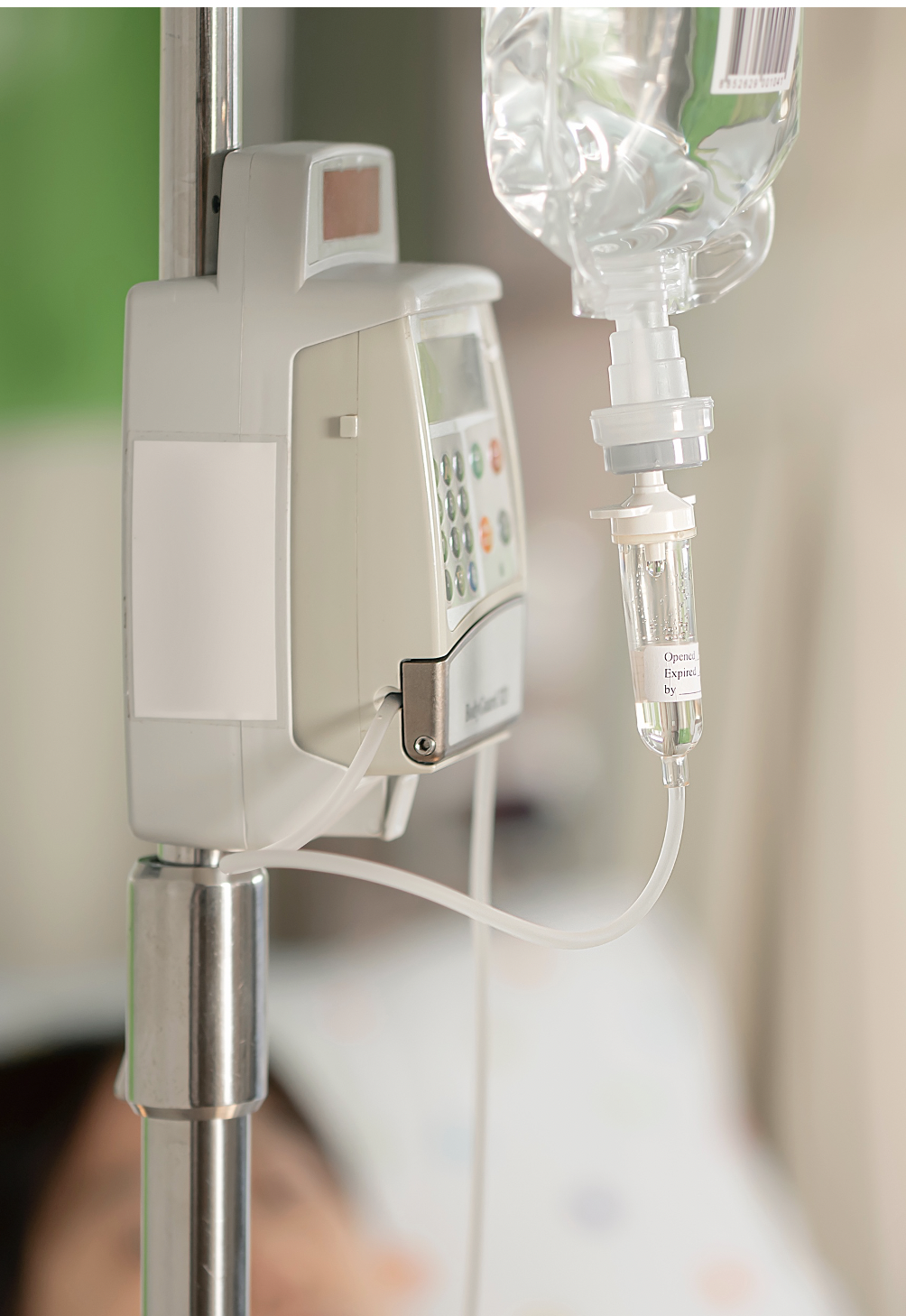 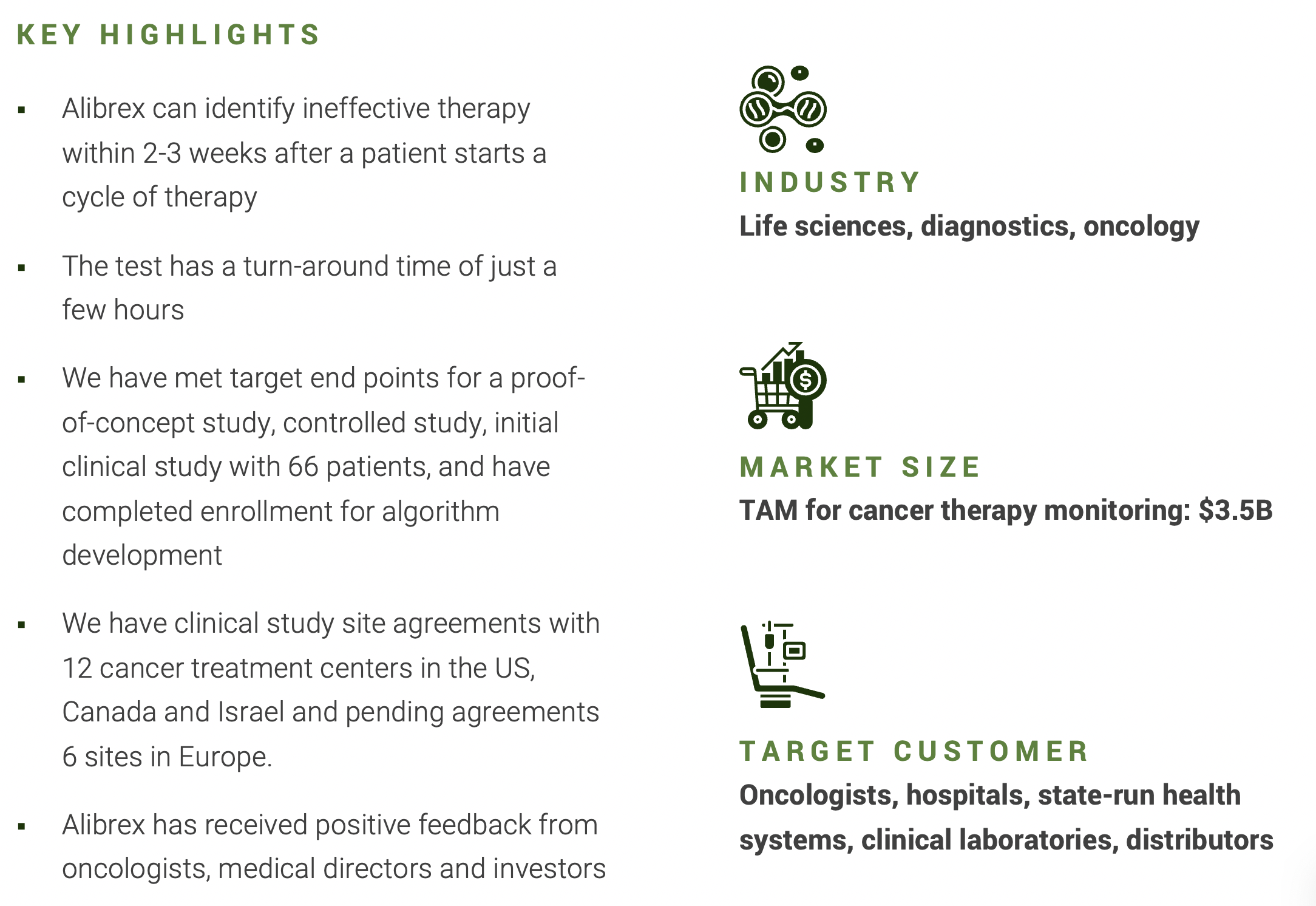 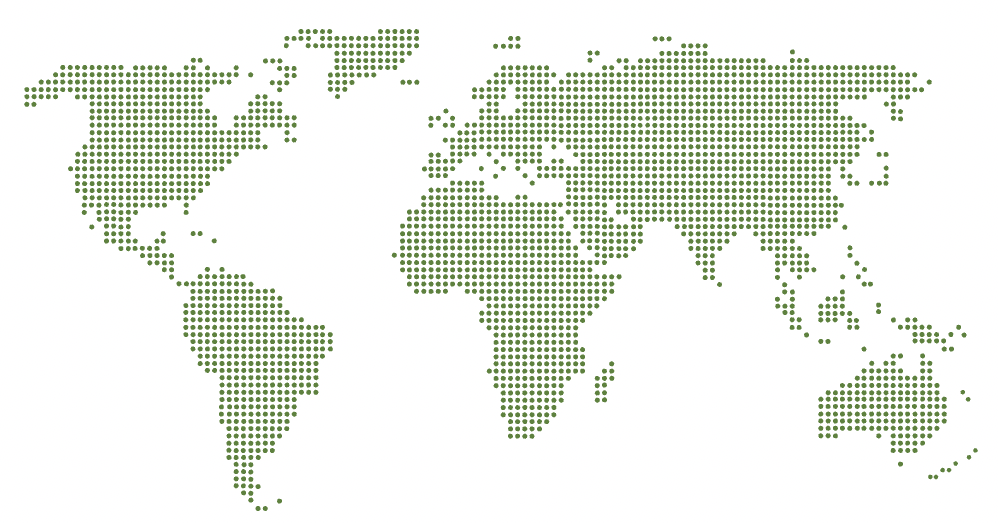 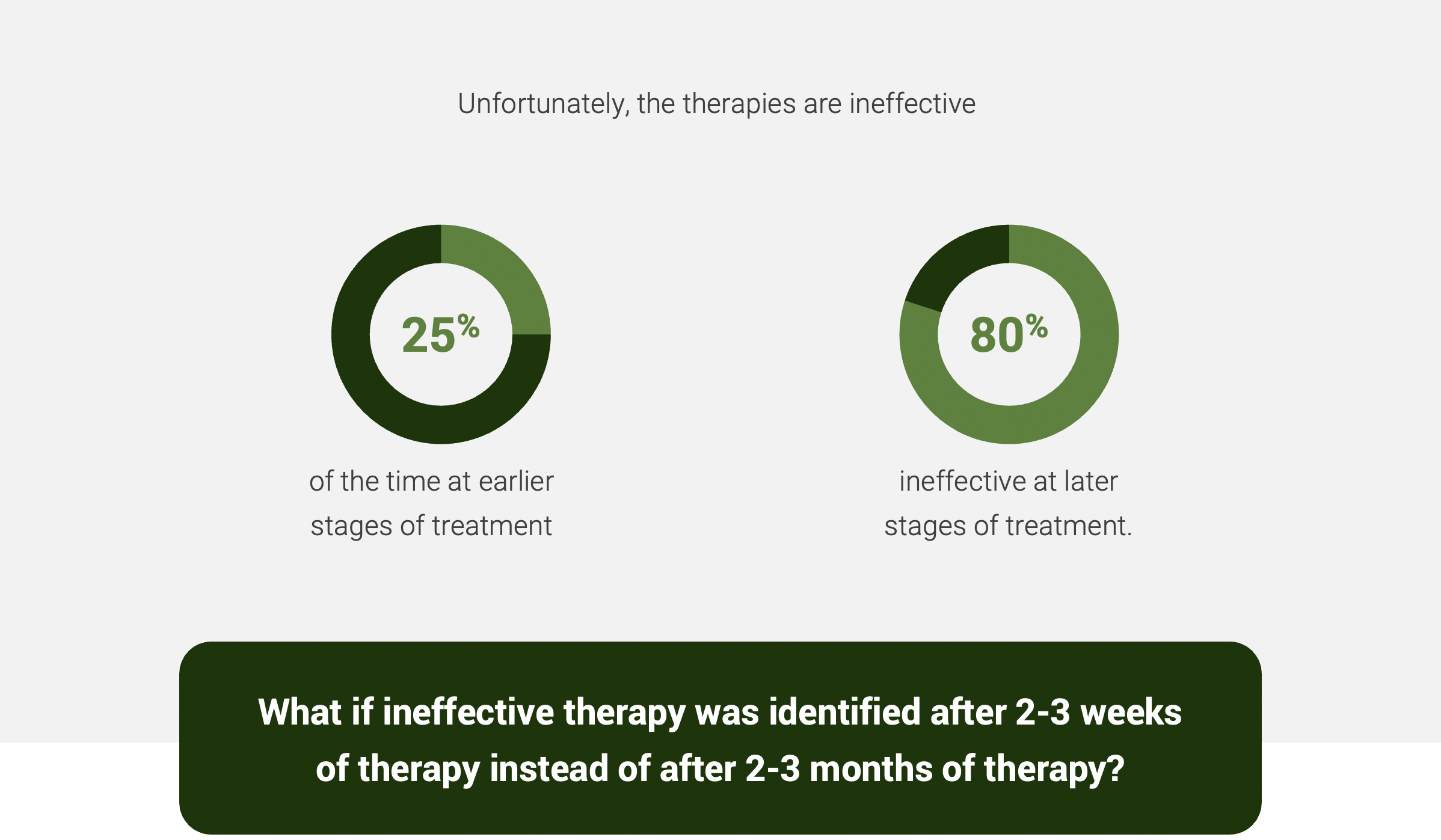 Alibrex is a blood-based diagnostic test that uses widely available and accepted lab methodology with a six-hour turnaround time. It delivers real-time cancer therapy monitoring results that identify ineffective therapy within 2-3 weeks after a patient starts a cycle of therapy, rather than 2-3 months. If therapy isn’t working, patients and care providers know sooner and can consider a different therapy.

Alibrex has the potential to improve the cancer patient’s quality of life and reduce the cost of care for patients and health insurance companies.

Alibrex uses qPCR, patented methods and DNA targets to measure very small changes in cfDNA levels with great precision and accuracy. Cadex Genomics also has patented technology to filter out cfDNA that are unrelated to a patient’s cancer.

Alibrex has a turn-around time of hours rather than days, which is critical for this intended use. The cost to run the Alibrex test is low, enabling pricing that delivers cost savings in different geographies and a positive gross margin to Cadex Genomics. 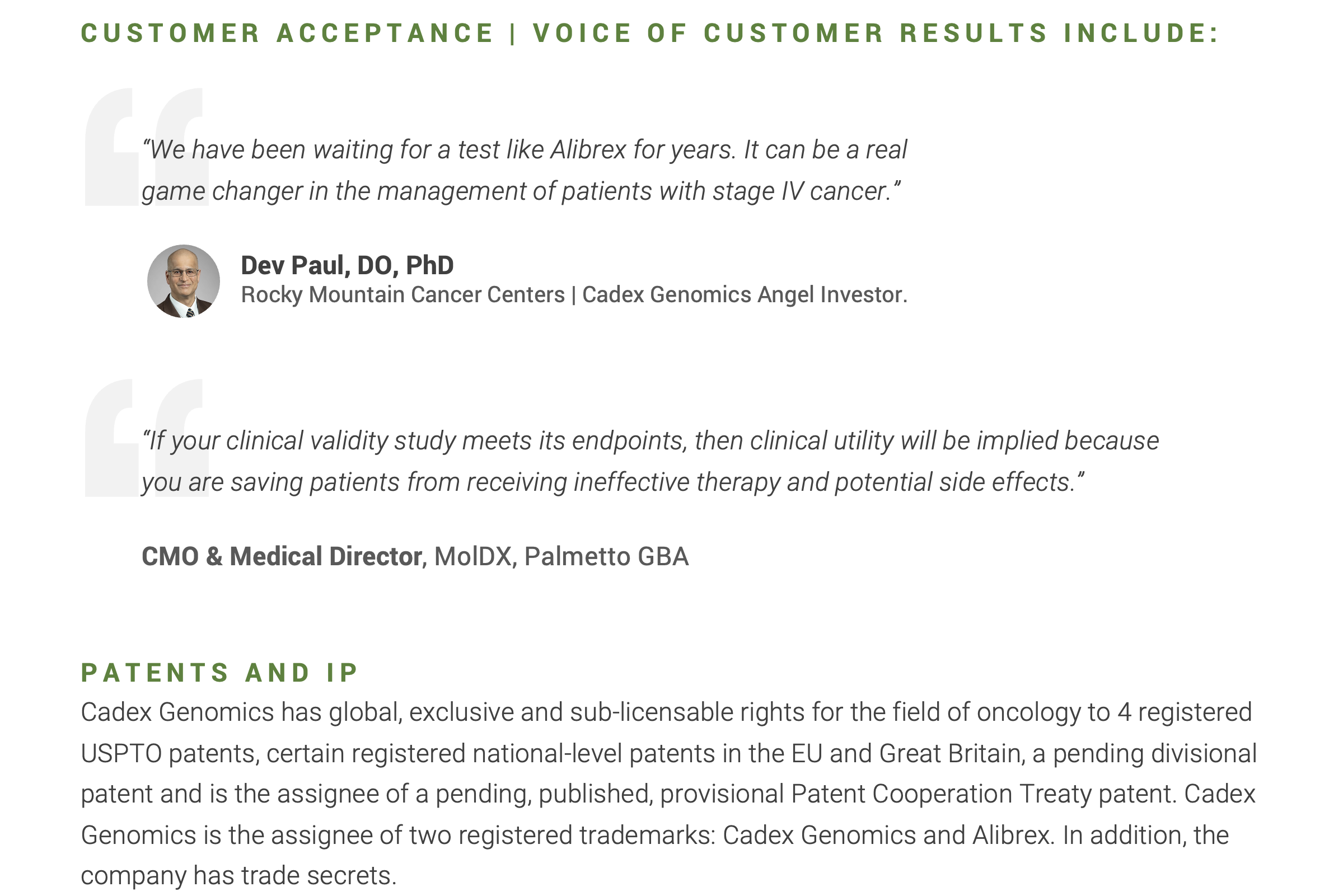 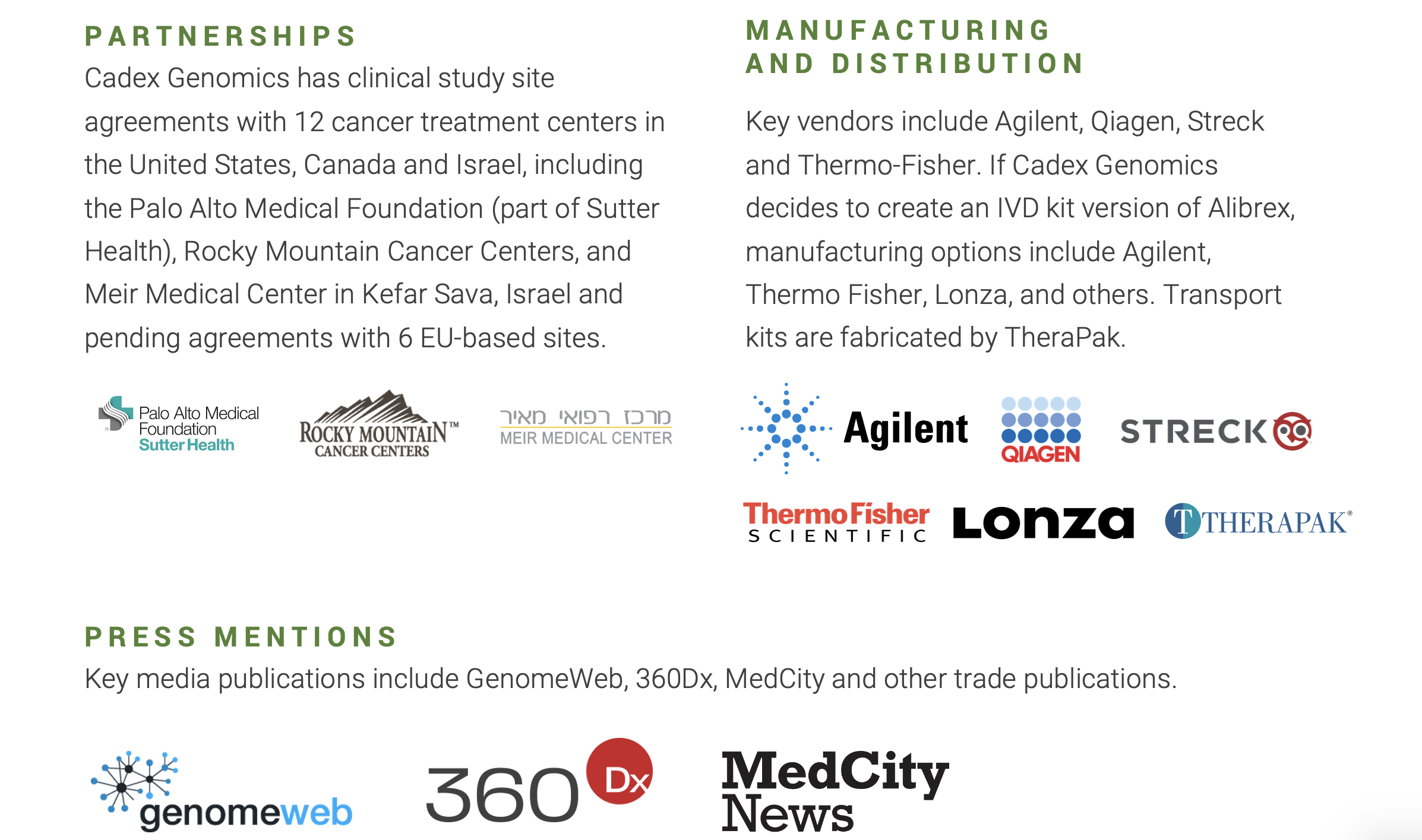 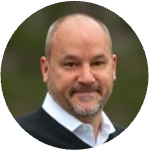 Bill Haack, President & CEO | Mr. Haack has over 20 years of experience in life sciences. He started his career at Genentech, where he led the Sales Operations team and the successful launch of Rituxan and Herceptin. He was an early employee at Genomic Health, where he helped lead and was instrumental in the success of the launch and commercial success of all three Oncotype DX products. Under Mr. Haack’s leadership, Genomic Health grew from a zero-revenue company to over $300M in annual revenues. Mr. Haack also led the launch of Genomic Health in Europe, where he led the start-up’s headquarters in Geneva and the establishment of commercial teams in the United Kingdom, France, Italy, and Germany. Mr. Haack holds an MA degree in Economics and Econometrics. 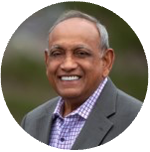 Sudhir Sinha, Ph.D., Chief Science Officer | Dr. Sinha is also the CEO of InnoGenomics Technologies, LLC, and an adjunct Professor of Biochemistry and Molecular Biology at the Tulane University School of Medicine in New Orleans. He has over 36 years of experience in biochemical research, Cancer Biomarkers research, and human DNA genotyping and assay commercialization. Before starting InnoGenomics, Dr. Sinha established and served as the Founder, President and Lab Director of ReliaGene Technologies. As President and Chief Scientist at ReliaGene, one of Dr. Sinha’s major achievements was designing and producing the first commercial Y-STR DNA testing kit. He was awarded an export promotion award by the US department of Commerce for the worldwide export of this novel DNA test kit. Dr. Sinha built ReliaGene from a two-employee company into a 90-employee company and successfully sold ReliaGene in 2007 to Orchid-Cellmark, which is now part of Laboratory Corporation of America. Dr. Sinha earned his Ph.D. in Chemistry from the Indian Institute of Technology, Kanpur and completed hisPost-Doctoral Fellowship in Biochemistry and Molecular Biology from the University of Miami, Florida. 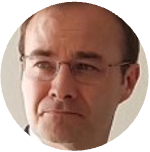 Christer Svedman, M.D., Ph.D., Chief Medical Advisor | Dr. Svedman previously worked at GlaxoSmithKline and Genomic Health. While at Genomic Health he built and led the medical affairs department for Europe and was a member of development teams for breast cancer, renal cancer, and liquid biopsy tests as Senior Director of Oncology Development. Dr. Svedman is a medical oncologist with over 20 years of professional experience in clinical oncology, pharma, biotech, and molecular diagnostics. He received his MD and Ph. D from Lund University. 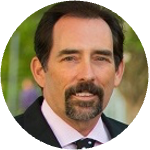 Patrick Hall, D.Ph., SVP, Medical Affairs | Dr. Hall’s career started at Genentech, where he was on the medical affairs team that launched Rituxan and Herceptin. Dr. Hall was also a member of the Rituxan and Herceptin clinical development teams at Genentech, facilitating and monitoring clinical trials. At Genomic Health, Dr. Hall formed and led the medical science liaison team and was involved with the launch of the Breast, Colon and Prostate assays. Dr. Hall was the Executive Director of Medical Affairs at Castle Biosciences and the first Medical employee, where he established a medical affairs team to support the company’s cutaneous melanoma test. He has more than 20 years of industry experience. 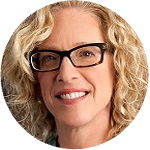 Lyssa Friedman, RN, MPA, SVP Medical Operations | Ms. Friedman has built and led successful clinical operations teams at multiple diagnostics companies. While leading clinical operations at Seer, she built the clinical operations group with over 40 sites activated in two studies over six months and developed the medical affairs and first product reimbursement strategies. As VP of Clinical Operations at Veracyte, she oversaw clinical studies leading to product launches, pipeline development and positive coverage decisions across the public and private sectors. She provides clinical development and medical affairs consulting services to diagnostic companies across indications, is a frequent speaker on diagnostic development and clinical and regulatory affairs and has authored more than a dozen peer-reviewed publications.