Gradspring is a job board that focuses exclusively on entry-level professional opportunities. We are designed to help college seniors and recent graduates more smoothly transition from college life to the working world. On Gradspring, a job seeker can: search and apply for open opportunities, follow companies and recruiters, create a robust personal profile, upload a traditional resume, post a video resume, receive professional cover letter/resume help, and access career enhancement content.

Gradspring is modeled after other successful niche job boards such as theladders.com and ivyexec.com. While Gradspring's service is free to HR professionals and recruiters, for job seekers, Gradspring utilizes a freemium/premium model. Freemium users have limited access to jobs posted on Gradspring, can build a profile and can access our internal blog. However, to unlock the full potential of the site, users must pay for a subscription. Subscriptions on Gradspring range in price from $35 to $125 depending on the term: one month, three months or six months. 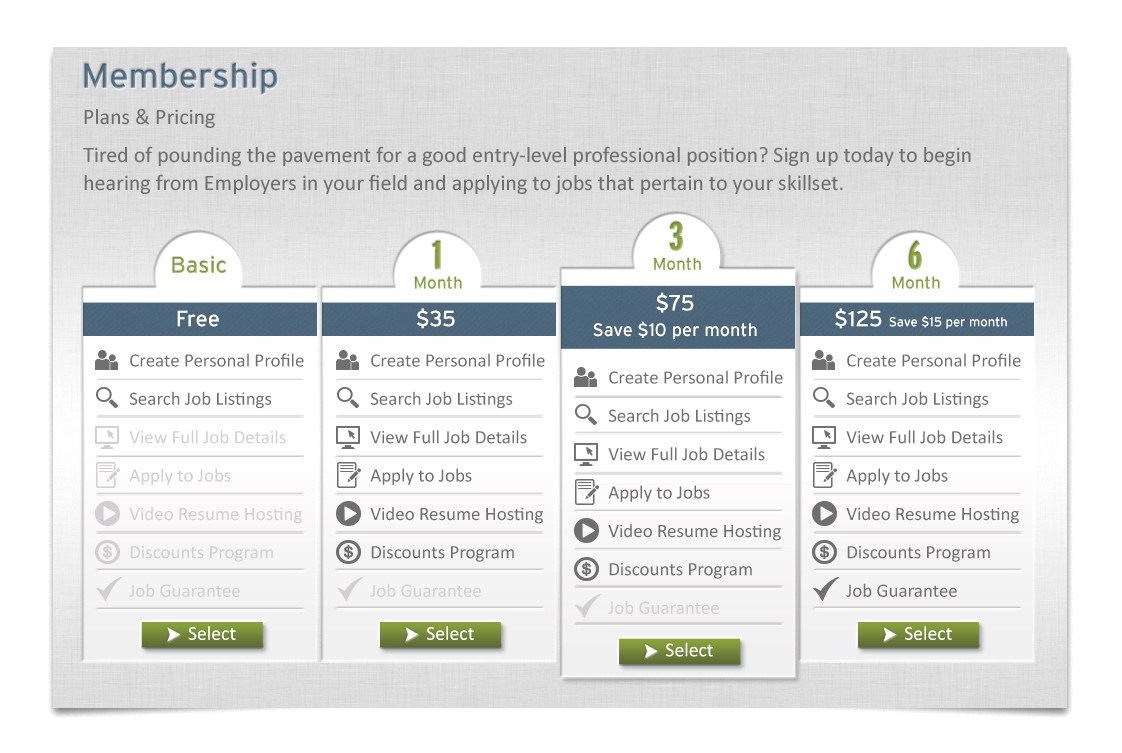 Who is Gradspring's Customer Base?

According to NPR, the Associated Press and the New York Times, the classes of 2011 and 2012 are suffering combined under- and unemployment rates between 51-53%. This means that there are roughly four million new graduates per year who are not working or who are working at jobs significantly below their skill levels. According to NACE and Talent Mark, state and federal funding of student services at public colleges and universities has fallen by an average of 8% over the last 4 years. This has resulted in a career counselor to student ratio of 1:1645 students. Furthermore, per student spending on career services has fallen to an average of $300 per student with some universities spending as little as $50 per student. At a time when universities should be actively working to ensure their students are equipped to enter a very hazardous employment market, the opposite is taking place. College career centers are understaffed, underfunded and technologically light-years behind the times. Gradspring intentionally marketed its services to college seniors and recent graduates but discovered a surprising customer base in parents who want to help their children realize the American dream.

To date, roughly half of Gradspring's paying customers are parents who purchased the service for their children. Additionally, Gradspring is developing relationships with student advocacy organizations and student centered businesses. Among Gradspring's marketing partners are the following: North-American Interfraternity Conference, National Panhellenic Conference, Professional Fraternity Association, and the National Pan-Hellenic Council, INC. Through these organizations, and many more with which Gradspring is currently negotiating, Gradspring will be able to reach out to students through trusted third-party sources.

Gradspring's History, Present and Future and What We Will Do with Your Money

Gradspring has been incorporated as an LLC in Tennessee since April 2011. We are partnered with ConduIT Corporation, a Nashville based VC/Incubator firm. Through Gradspring's relationship with ConduIT, we raised a first-round angel fund of $175,000. Currently, Gradspring is raising a second-round of financing through angels, friends and family, and crowdfund sources, such as Fundable. Gradspring launched its beta site in May 2012 as a part of the Groupon "School's Out" campaign. Currently Gradspring has 2500 subscribers, roughly one-third of whom are premium. Of the premium subscribers, more than half purchased at the three- or six-month levels. Gradspring is currently working on version 2.0 which will be faster, have more features and be more scaleable to a national audience.

Click on the links below to view news stories about Gradspring.

For more information about Gradspring in the media please feel free to visit our blog at www.gradspring.com/blog