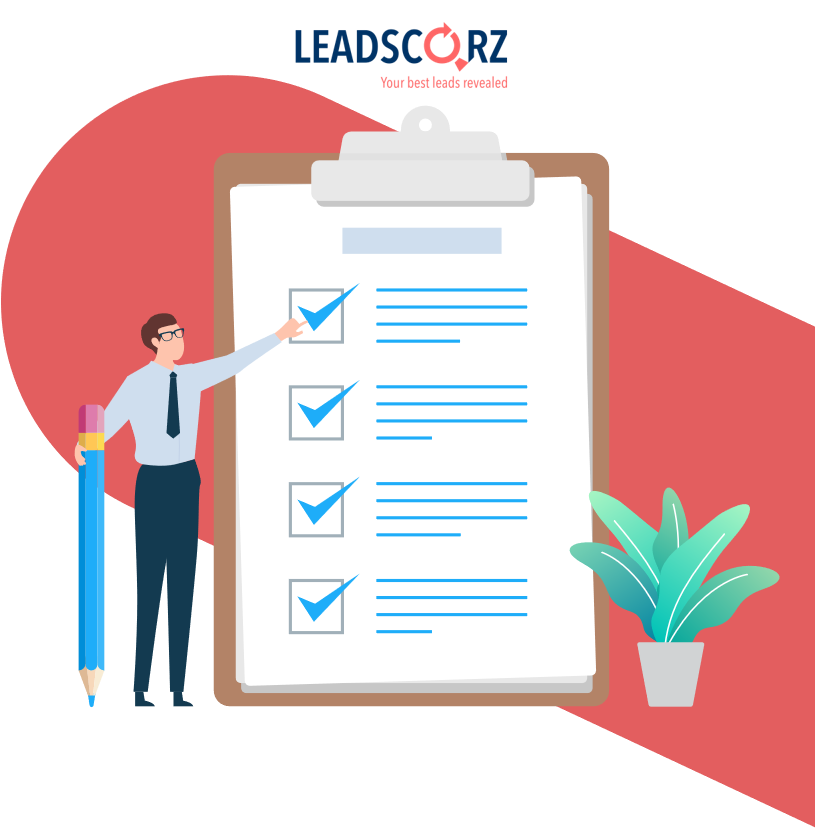 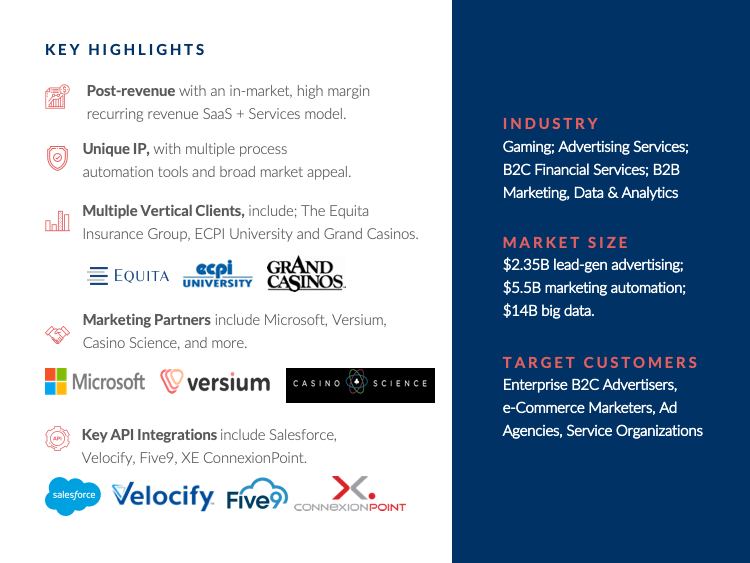 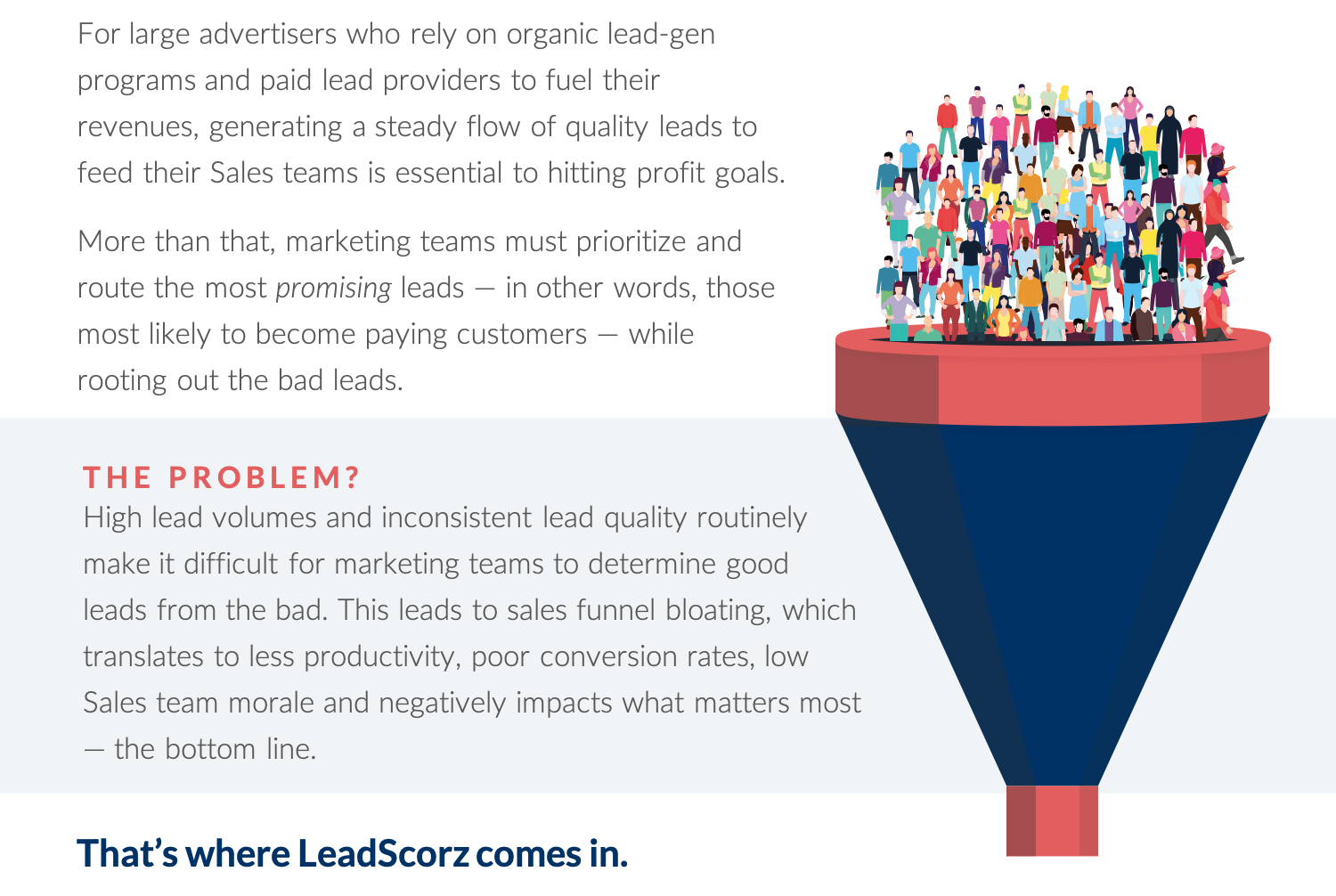 LeadScorz makes it possible for marketing teams to identify their best leads instantly by pre-qualifying, accurately scoring, and dynamically prioritizing leads in real time at the point of submission - before forwarding them on to the sales team.

Historical Data Analysis | Big Data and AI-powered predictive modeling tools enable marketers to monetize their own historical data by leveraging hundreds of demographic and behavioral data points to provide insights to each Consumer.

Custom Scoring Models | LeadScorz’ SaaS platform optimizes both lead scoring and new lead generation based on the advertiser’s own historical CRM data – a capability no other scoring solution offers.

Pre-Filtering Paid Leads | Leads are pre-scored instantly prior to delivery to the Buyer, allowing them to accept/reject paid leads based on a score threshold – saving them money and time.

Lookalike Leads | Advertisers can use LeadScorz models to geo-mine custom audiences of "lookalike" leads from a database of virtually every North American adult. 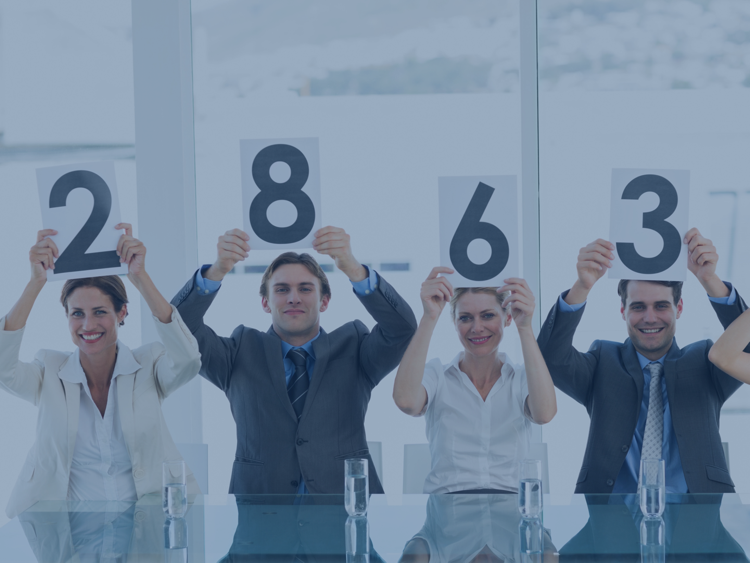 LeadScorz is purpose-built, using Artificial Intelligence to enhance every step of the lead-generation and nurturing process — allowing clients to better connect their products and services to customers through predictive analytics in the most cost-effective way possible. 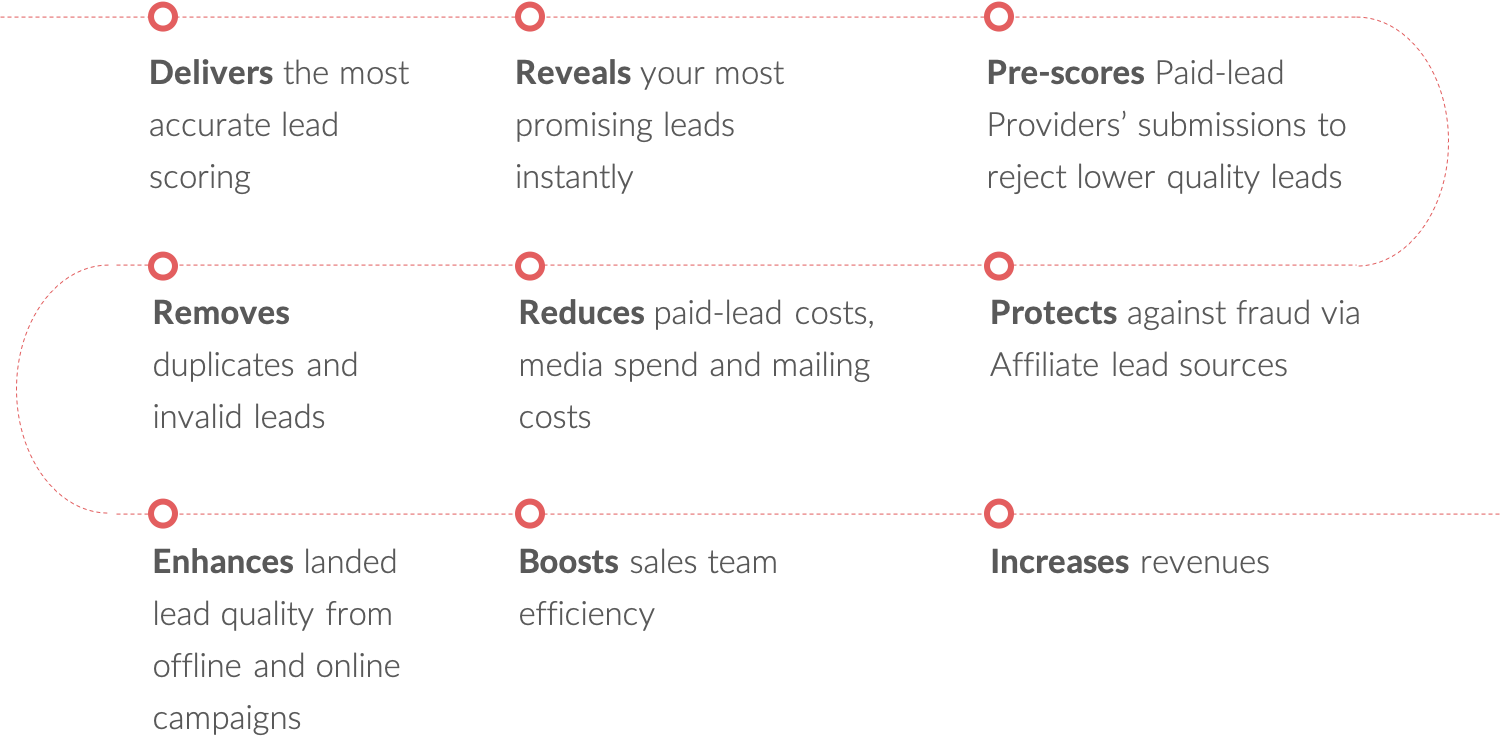 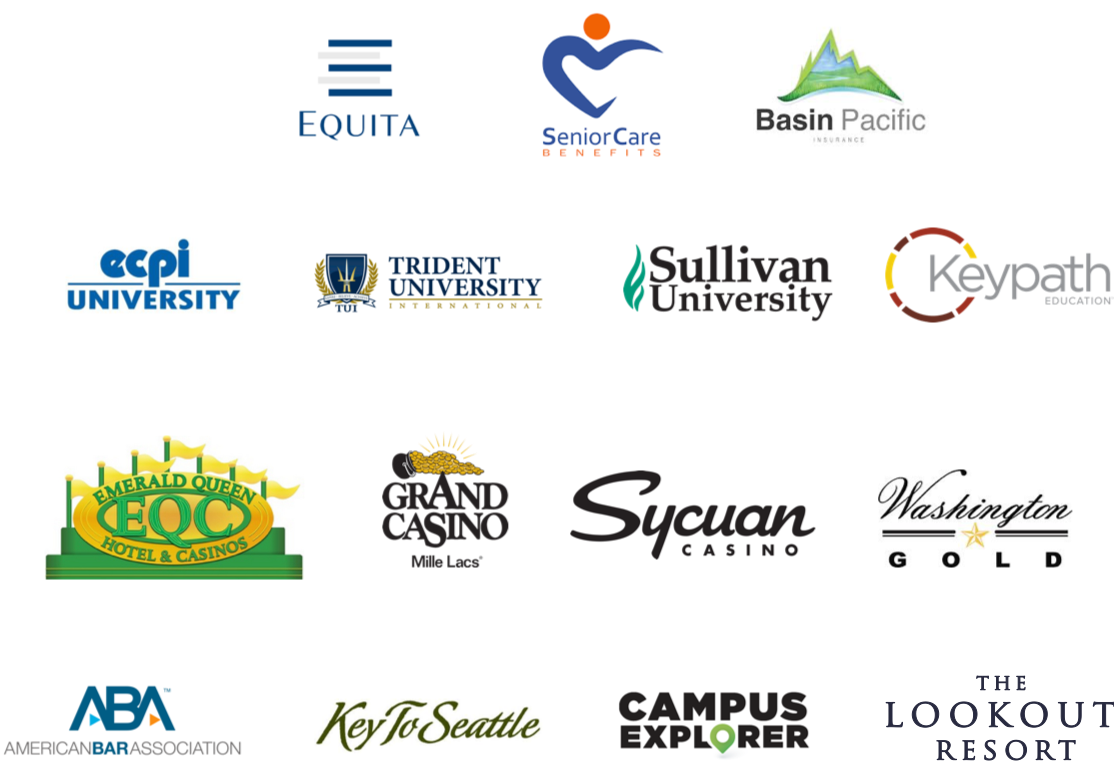 What our Customers are Saying 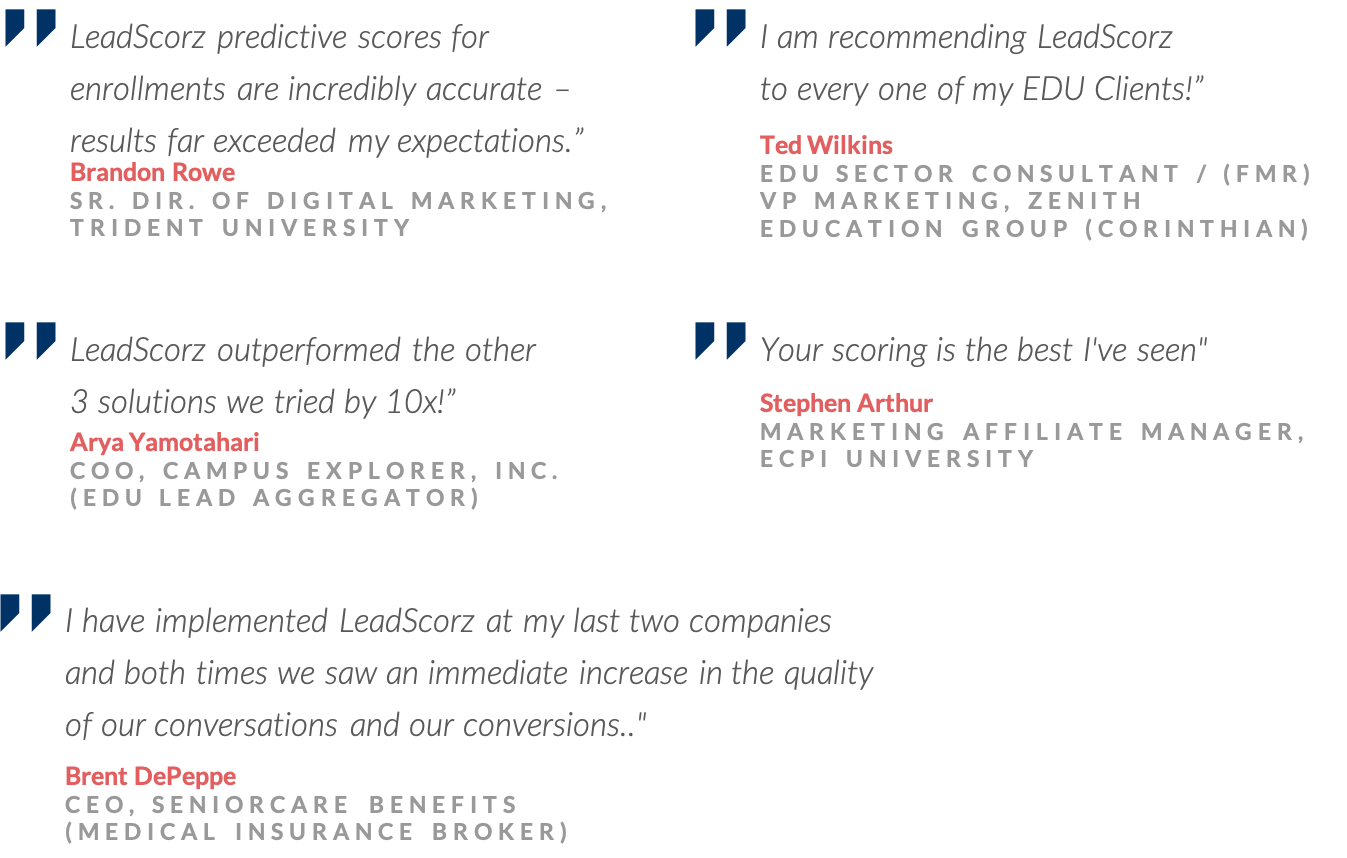 Pat has been creating and growing technology companies since 1984, starting as National Sales Director for Medical Computers Inc. He has achieved several successful exits, including the acquisition of his partner stake in Benchmark Systems in 1995, a $65M IPO of N2H2, Inc. in 1999, where he served as Sr. VP of Sales & Business Development, and the sale of Mosaix Communications (which he co-founded) to SimLab in 2005.

Pat has co-founded 4 additional companies, including NetMinds Consulting, Key2Seattle Real Estate (co-owned & currently operated by his wife Kris), and Vega Performance Marketing, Inc., a Microsoft Partner company which he co-founded with Judd Boone and from which the original LeadScorz platform was spun out from.

Since 2017, Pat has been focused on developing the current LeadScorz platform and growing its customer base, funding the LeadScorz developmental venture in Orca Analytics, and subsequently raising a $750K Seed round to form LeadScorz Inc. in September 2018. 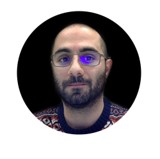 Mr. Diez is the Principal in Fractal Fentos, a Madrid software development firm which serves as an independent contractor to LeadScorz. He has over 15 years of experience as a Lead Developer and Program Manager of multiple cloud-based applications. Mr. Diez worked as Lead Developer on the original precursor platform to LeadScorz, and has led the design and development for our current platform since its inception.

Judd has been Mr. Murphy's business partner since 2003 as Director of Marketing of Mosaix Communications, Inc., Co-Founder of Vega Performance Marketing, Inc., and Partner in Orca Analytics. He currently serves as a contract consultant to LeadScorz and is a primary Shareholder. As the Operations Manager for Orca Analytics, he will support LeadScorz as a Strategic Business Partner (as a vendor Agency to LeadScorz clients). Mr. Boone also serves on the LeadScorz Advisory Board and is active in business development efforts for both firms.

Brian Conte
DIRECTOR
Brian has served on the Board since its inception. He currently serves as AI Lead at Unify Consulting, after serving as CEO and President of Fast Track for almost 20 years. Brian has served as a Founder, CEO, and CTO of several high tech startups, including Wild Noodle and Brain Builders. He has extensive experience in Artificial Intelligence, Big Data, Machine Learning Applications and Natural Language Processing. Brian has led teams as a Programming Engineer, Data Analyst and Operations Executive. He successfully led development teams of 75-100 and shipped 100+ products. Brian has grown several startups to long-term profitability and successful exits.