We Let Entrepreneurs Build Their Businesses, Not Waste Time with Spreadsheets

Experienced entrepreneurs understand how important it is to have income statements, cash flow statements, and balance sheets, but they also know how time consuming they are to produce accurately, and to make matters worse, they know that these financial statements need to change constantly as business assumptions change.

Where Are We Going?

We will use the funds raised from our successful Fundable campaign for the following activities: 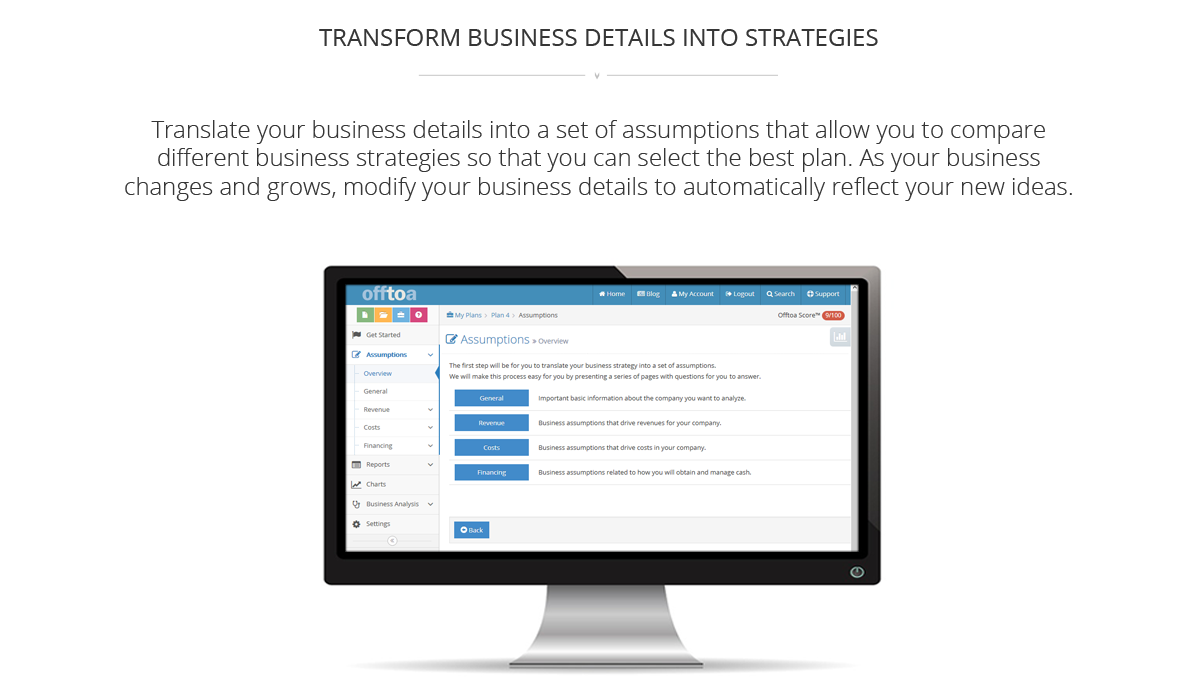 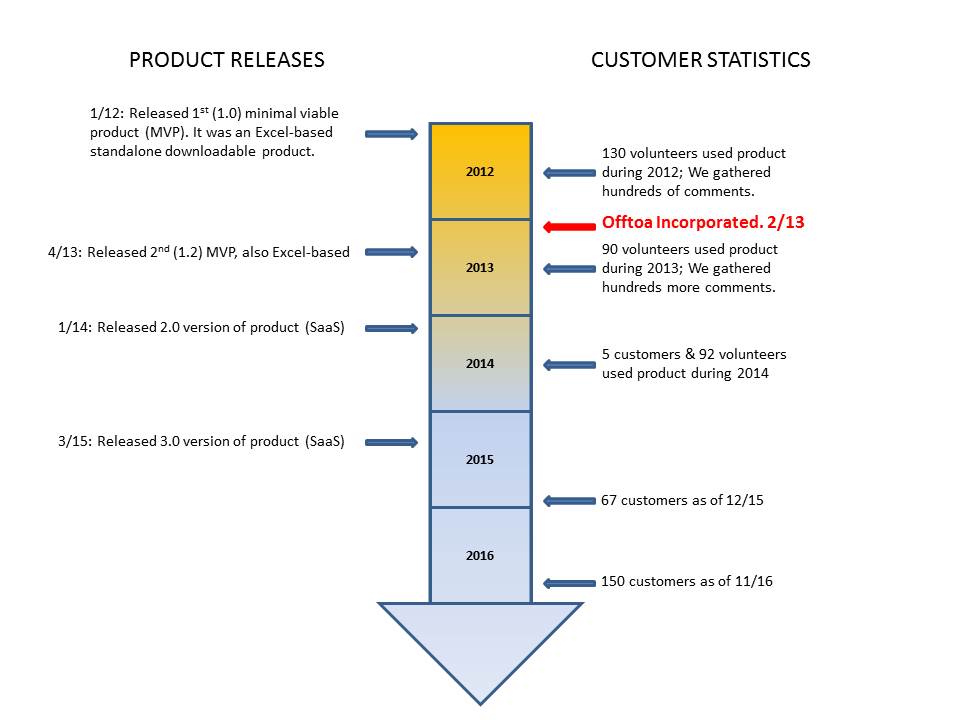 More About Our Background

We offer our service over the web using a Software-as-a-Service (SaaS) model at our website www.offtoa.com. The preferred subscription is annual, but clients can also purchase month-by-month subscriptions as long as they are satisfied with storing a maximum of one financial plan (they can change it repeatedly, but each "save" replaces previous versions). The price of annual subscriptions increases with the number of financial plans the user wants to have simultaneously. Such plans can be used for multiple startup companies or multiple scenarios for the same startup. We also offer a 14-day, fully functional, free trial account.

Offtoa, Inc., has been funded to date entirely by the founders, using convertible debentures. For those of you not familiar with this term, it means the founders write checks to the company to support ongoing operations; these appear as low-interest loans (liabilities) on the company’s balance sheet. These remain as liabilities until (a) the company chooses to pay them off, or (b) an outside investment occurs, in which case the loans convert to equity and the loans are considered paid off. To date, no outside investments have been solicited or received.

Since the inception, the staff of Offtoa has been rewarded with generous stock options in appreciation for the great contributions they have made and are making to the company’s success. A total of two million common shares have been authorized. One million were purchased by the two co-founders and the other one million have been allocated to the stock option plan. As of November 30, 2016, 663,734 shares out of the pool of 1,000,000 stock options have been granted.

Offtoa, Inc., is a virtual company with no physical offices. The staff works out of their own homes on their own schedules, and we meet twice a month via teleconference. We live in three states: Colorado, New Mexico, and Washington.

We have a 3-member board consisting of the two co- founders, plus William “Bill” Moyes. We meet physically approximately once per year and virtually as needed.

Our legal counsel is provided by Ben Sparks of Sparks, Willson, Borges, Brandt, and Johnson, P.C., of Colorado Springs, CO.

What Our Customers Are Saying . . .

"With Offtoa I can get answers to just about any question I have: What’s my breakeven on this new product? If we move the location of manufacturing, what’s the impact on COGS and profit per unit? What is going to happen if we ramp up to a million units by the end of this year? Which of four possible scenarios is best for us?"

"I have been playing with Offtoa for a while. We tested different business models, for example, variations and mixes between selling large products, licensing, and selling our apps as downloads and even adding downloadable content. It is very intuitive, really fun to play with, and easy to update. With Offtoa we did in half an hour what previously took us months. Now we know what we don't know, and what to talk about when we meet with potential partners or investors. You have no idea how much you simplified our lives!"

"Offtoa . . . is indispensable for a talented but inexperienced entrepreneur. It collects and makes sense of the most vital information the company needs to be able to discuss fluently with investors and understand their company. You can move things around and find the key levers of control in your business. A must have tool!"

. . . Chi Atanga, Founder of The Walls of Benin

"As a small business owner starting a second company Offtoa made it incredibly easy to run pro formas enabling us to do the necessary planning to move our business forward."