Shasta Daisy is introducing a new and innovative approach to coffee making. Our shops will use fully automatic coffee machine technology to produce the cleanest, most consistent espresso-based beverages. The machine’s artistic mechanical interface will also create an exciting experience for each customer coupled with a shorter wait time. By implementing an annual rotation of theatrical themes in our shops, we will create repeat customers who return for both the great coffee and new themes. 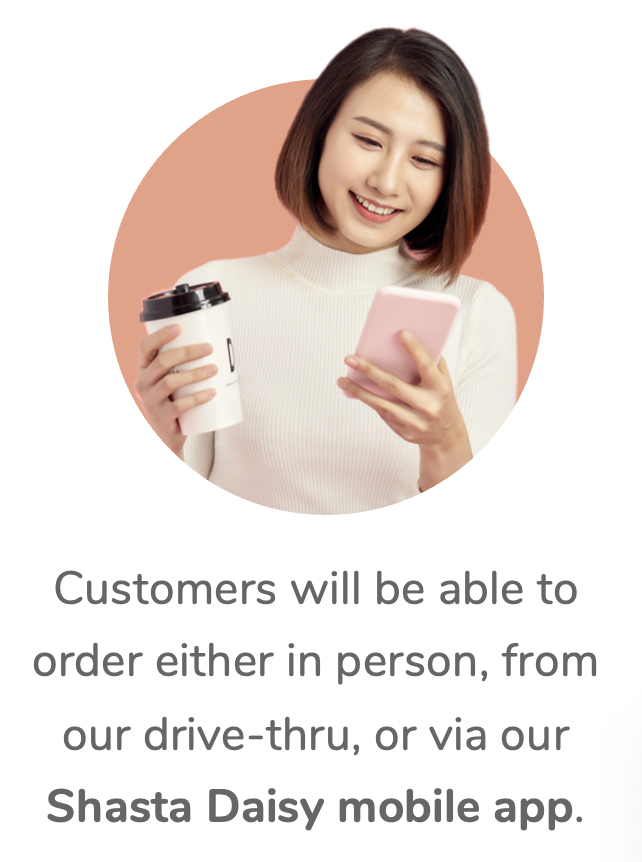 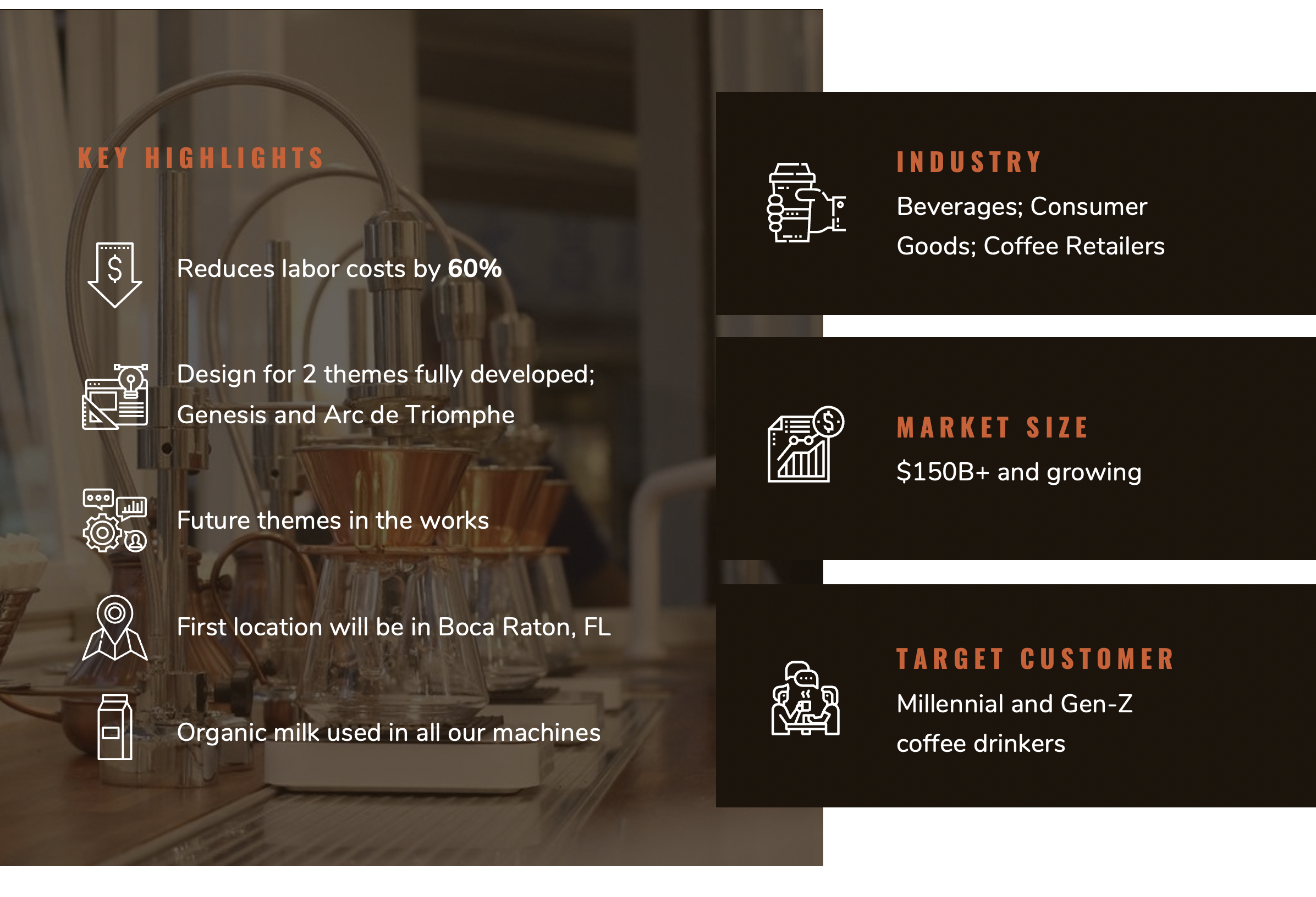 Consumers’ love for coffee reaches far and wide but the coffee shop industry has yet to evolve to embrace the high demand.

Shops require a large number of baristas on the premises to craft coffee drinks. Not only does this cause a bottleneck in time efficiency, but it also results in quality and taste inconsistencies. 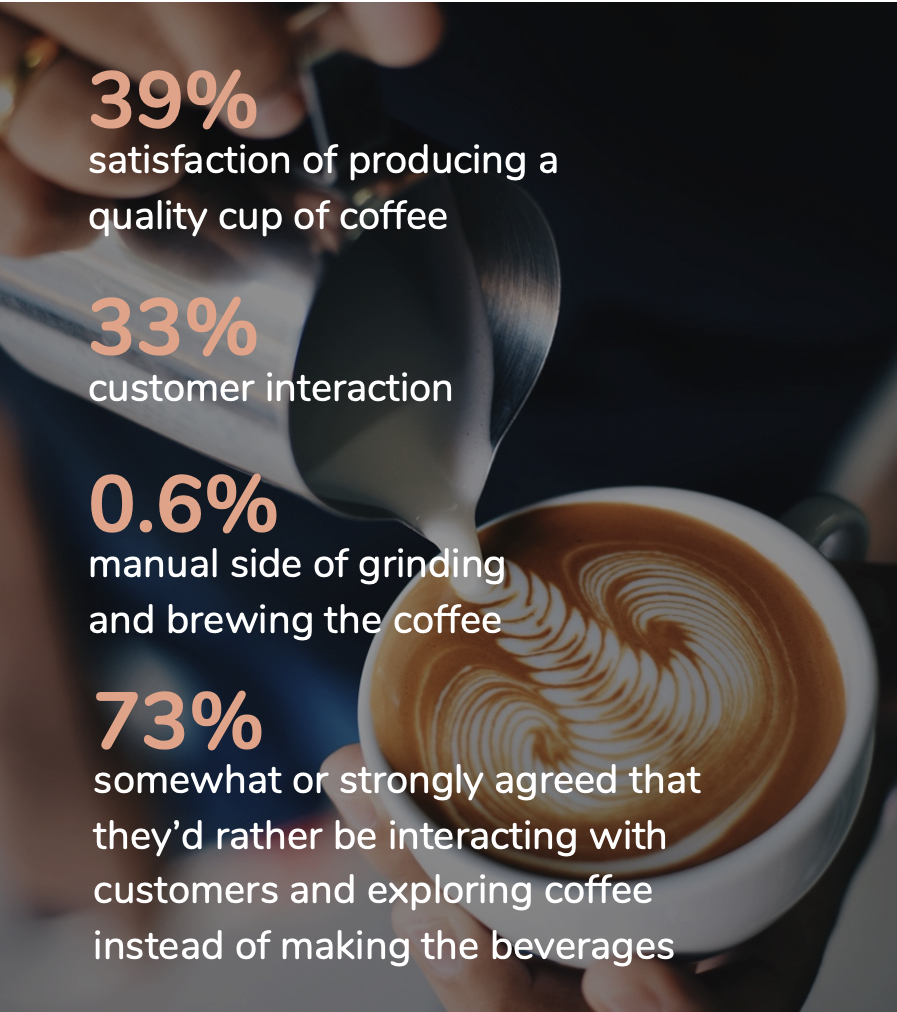 In a recent series of polls of the Barista Hustle coffee community where 2,796 responses were received, it was revealed that most baristas enjoy their job. The satisfaction of producing a quality cup of coffee came top, 39%, customer interaction came second, 33%, while the manual side of grinding and brewing the coffee received 0.6% of the vote. The polls also revealed that 73% of baristas somewhat or strongly agreed that they’d rather be interacting with customers and exploring coffee instead of making the beverages.

That’s where Shasta Daisy comes in.

Shasta Daisy shops will be home to our fully automated coffee machines that will be able to produce 350 cappuccinos, lattes, and other espresso-based drinks per hour, per machine. In contrast, conventional coffee shops can only produce around 200 beverages per hour.

Reduced Labor Costs | Our shops are designed to need only two or three employees to work at a time to operate the machines, reducing labor costs by 60%. This will also significantly lower overhead costs, resulting in a higher profit margin.

Consistent, High-Quality Drinks | The purpose of our concept is not to remove the barista, but rather elevate their role and remove the margin for error through our fully automated technology. Our baristas will be able to craft higher-quality beverages and have more time to engage with the customers. They will share their knowledge with each customer while creating an enjoyable, personal experience.

Unique Customer Experience | Easy in-store or mobile app ordering combined with our theatrical themes incorporated into our machines will provide a unique experience for our customers and add flair to the currently mundane coffee buying routine. 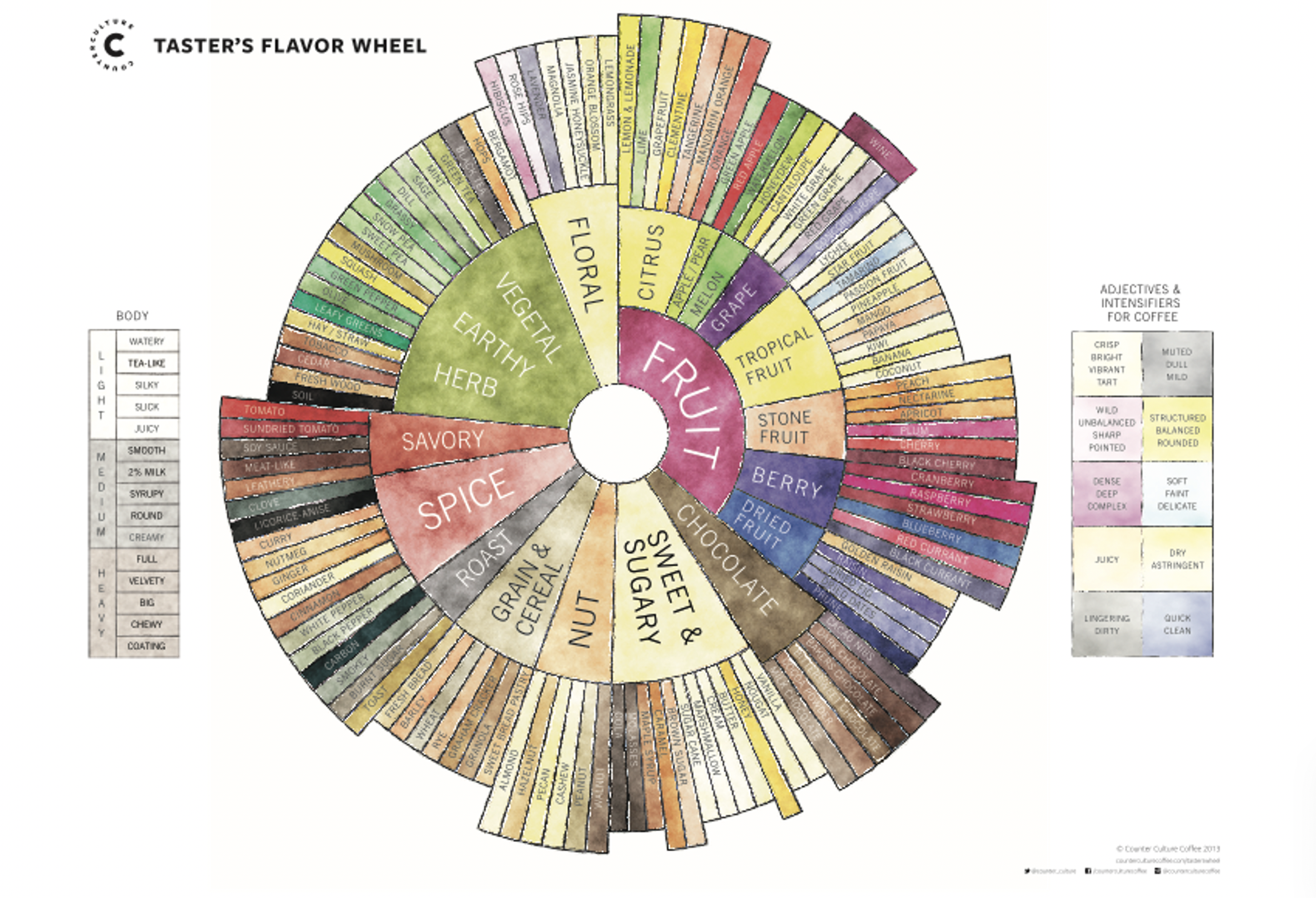 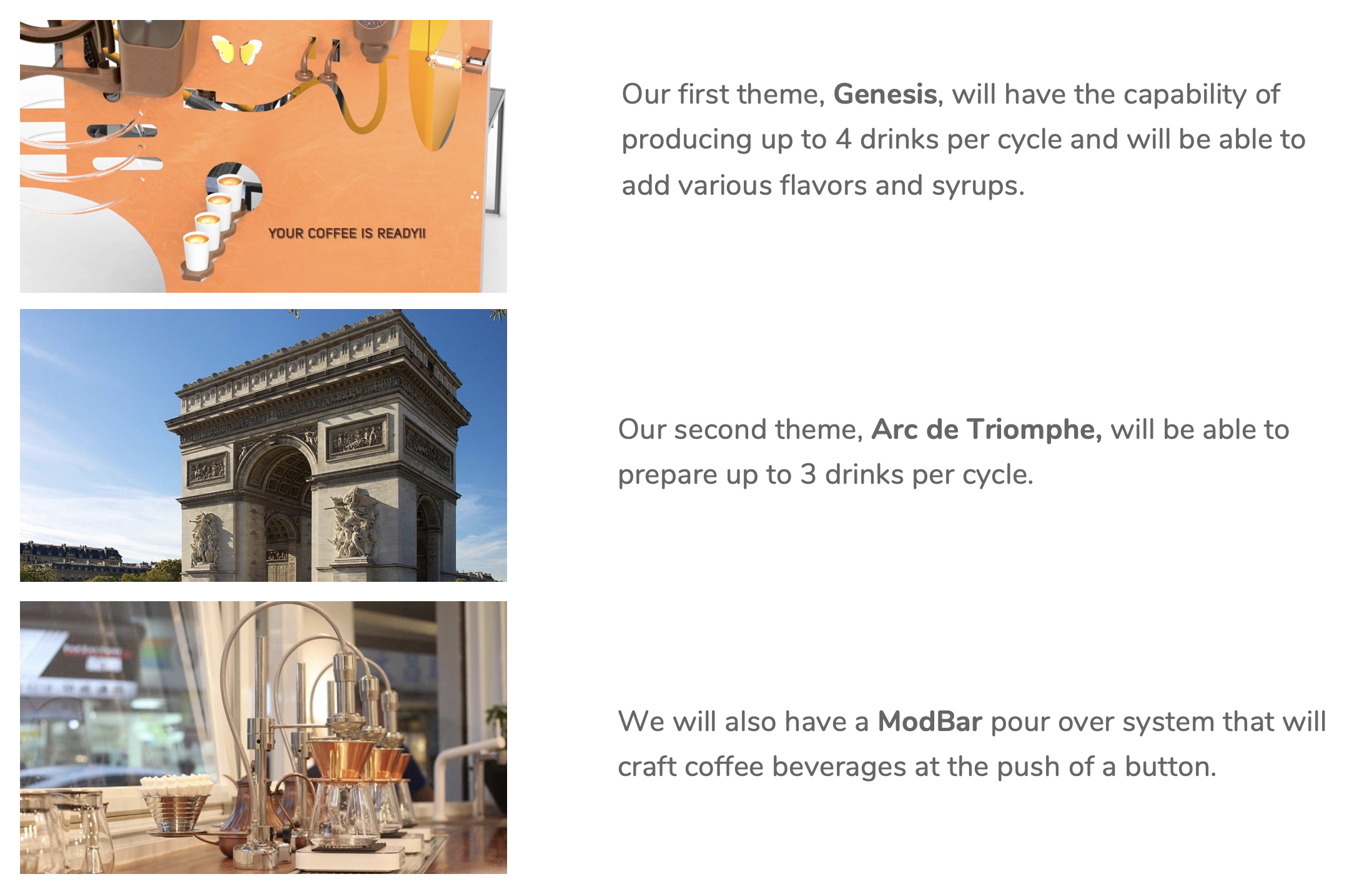 WHAT WE’VE
DEVELOPED SO FAR 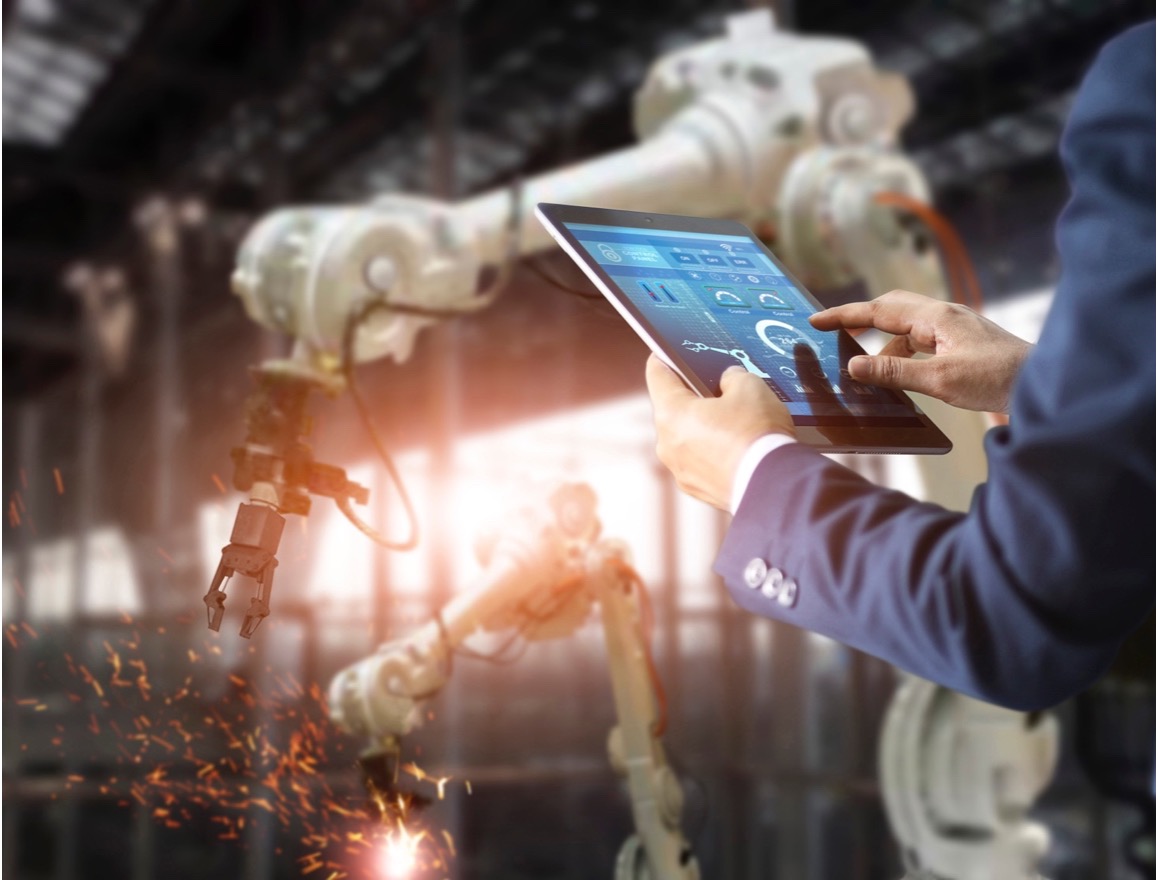 We have our two first themes fully developed, Genesis and Arc Du Triomphe, and Genesis is currently in the building stage.

Future themes are being sketched out as well.

The professional mechanical design programming, incorporated with square point of sale or similar, will be completed with DevoMech solutions after our Genesis theme is finalized. 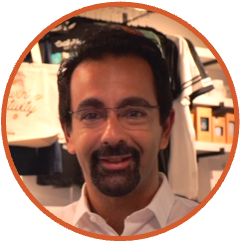 Christopher Moawad, FOUNDER
A designer by trade since 2006, Christopher spent many hours thinking about his experience in coffee shops. He identified several problems, the biggest of which is the need to use an excessive amount of labor force to prepare drinks. By taking advantage of existing technology, Christopher has created a solution for consistent, efficient, clean and theatrical experience every time that reduces labor costs by 60%.

Yasmin Moawad, BRANDING CONSULTANT
Yasmin is a brand developer with 14+ years of experience in marketing.

Devomech Solutions
Engineering firm we will be working with for the production of our machine. They have worked with trusted brands such as Mercedes Benz, Toyota of Canada and more.