A social matchmaking and dating app for singles and their friends 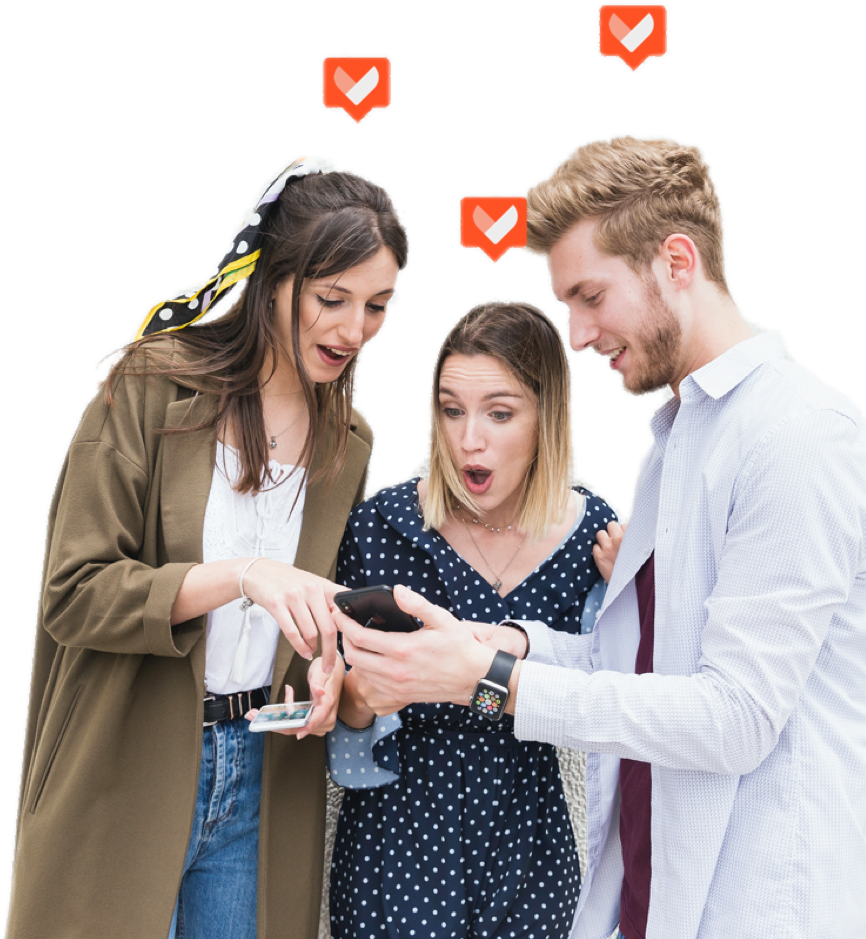 Meet Vouch:
Co-founded by The Bachelor fan favorite Sean Lowe and group of close friends, Vouch is a social-matchmaking and dating app that encourages singles to invite their social circle to “vouch” for them. Single and non-single friends are encouraged to post review-like references on their friends’ profiles that help provide social context. Users can independently swipe for their friends and suggest matches to help their friends choose the best dates. 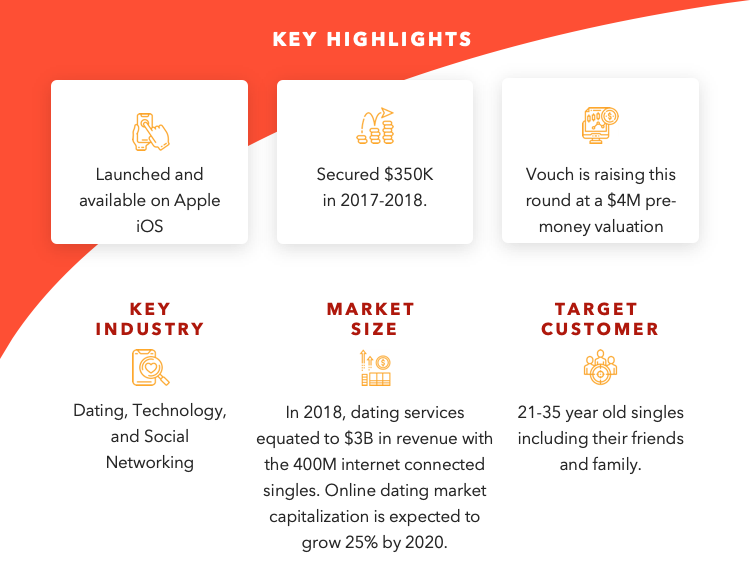 Current online dating solutions make it difficult for young adults (21-35) to transparently connect with other singles interested in serious relationships. The isolated experience and "hook-up" culture promoted by these apps have made it difficult for authentic users to find meaningful connections without the risk of deception, harassment, and even potential violence. 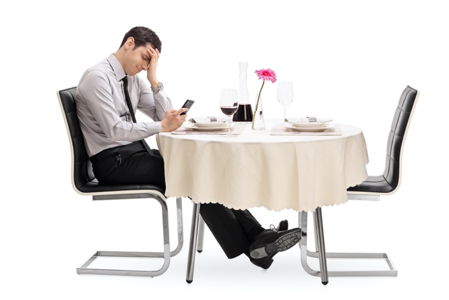 Currently, about 50% of US singles (18-59) have not used an online dating app citing harassment, scams, and lack of authentication measures as major problems.

Existing apps do not allow friends to help in the dating or match-making process in a socially driven format. 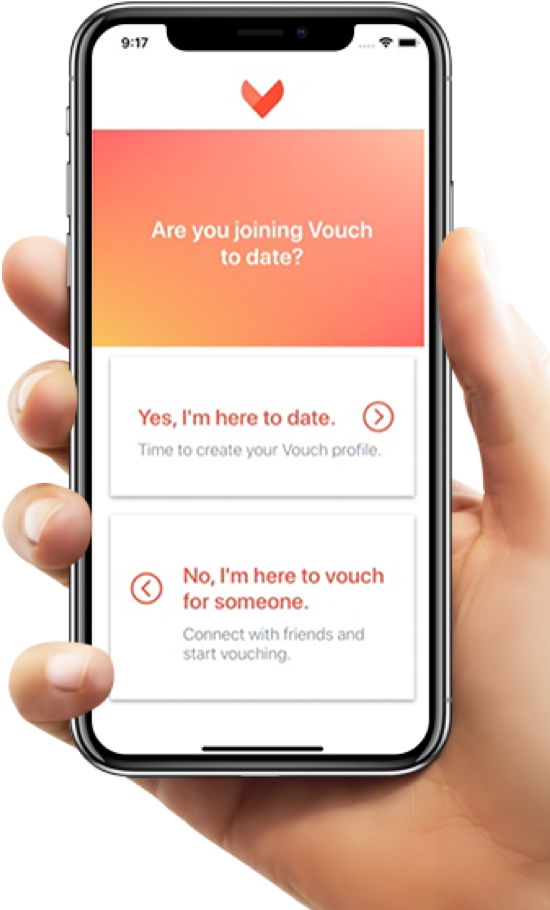 Swipe right with confidence.
GONE ARE THE DAYS
OF SWIPING ALONE

Vouch removes the isolation from online dating by combining a proven social networking effect to the dating world in a way no application or site has before.

Vouch enables “safer swiping” through social validation, each user can be assured they are chatting with the person represented in the user’s pictures and biography. 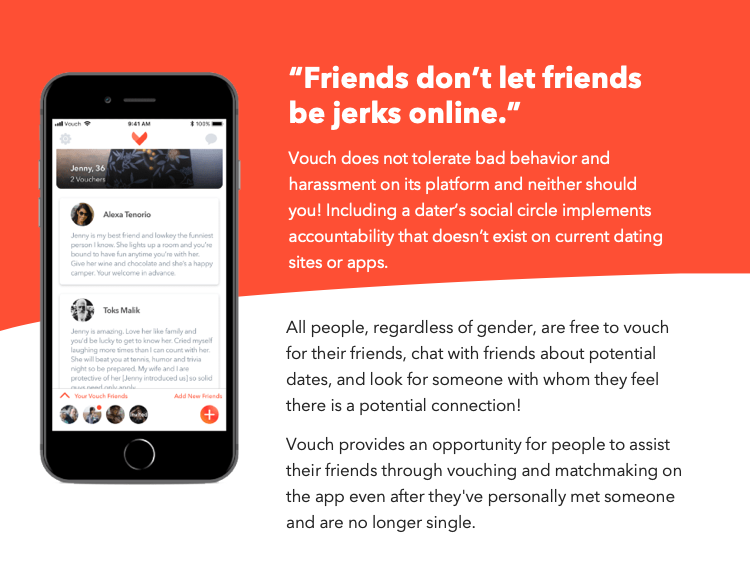 Swipe right with confidence.
SEE WHAT LIFE IS ALL ABOUT

Vouch created a quick-start way for singles to begin pursuing love in a socially comfortable, fun, and relaxed manner.

In 2020, Vouch will expand app accessibility to Android users through the Google Play store. 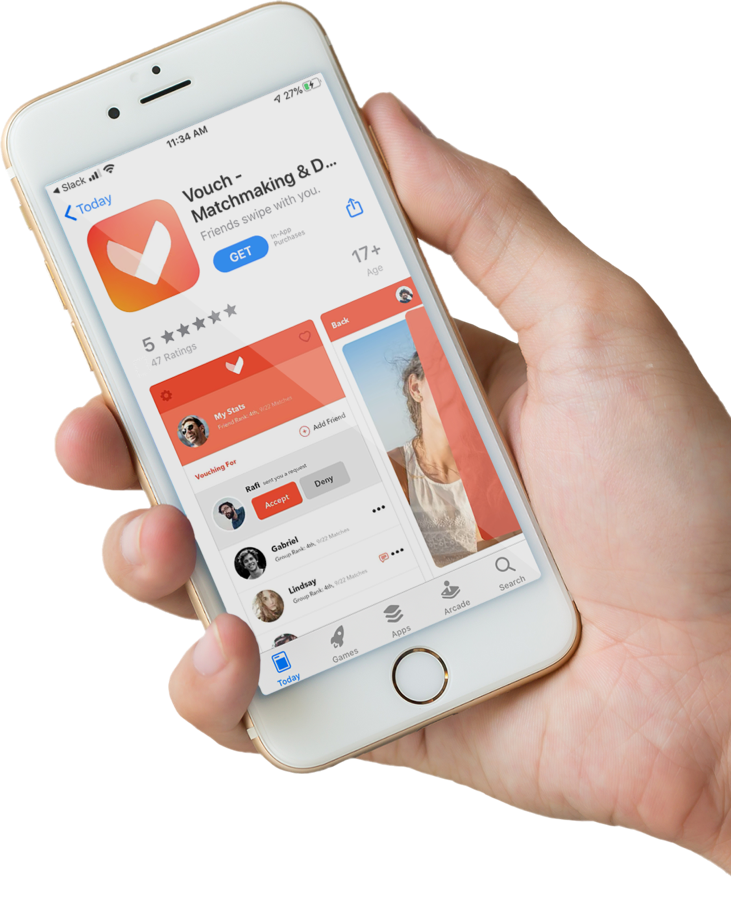 Vouch has 20,000+ downloads and continues to grow each month.

Vouch is targeting a sub-$4 CAC as it leverages social features that uniquely aid in user retention and viral potential. 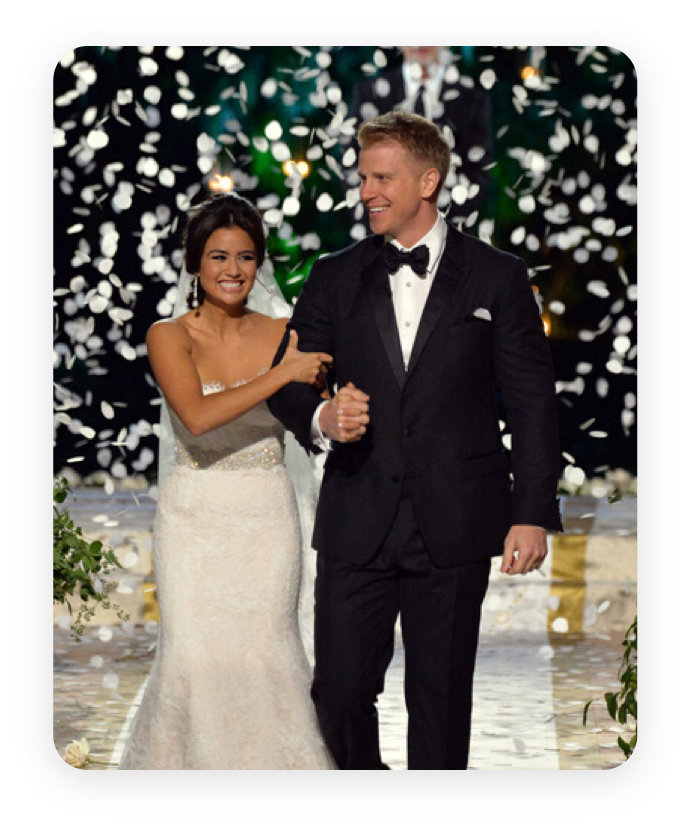 Vouch recently brought on Christiana Yebra as their first female CEO. Ms. Yebra’s dedication to the mission and user experience has brought about increased engagement from users both on and offline. 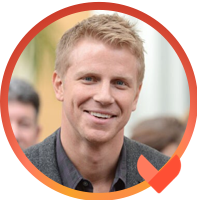 SEAN LOWE
Co-Founder & Brand Ambassador
Sean Lowe is best known for his role on the 17th season of ABC’s The Bachelor (2013) and remains the most popular Bachelor in the show’s 20 year history. In addition to continued involvement in a number of other shows including ABC’s Dancing with the Stars, Lowe has participated in several entrepreneurial ventures in the real estate development, energy, and technology industries. Sean is a graduate from Kansas State University in 2006. 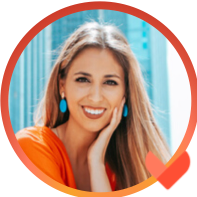 CHRISTIANA YEBRA
Chief Executive Officer
Christiana Yebra was appointed CEO of Vouch in February 2019. After graduating with a degree in biology, she helped launch and sell Texas’ first on-demand mobile urgent care app. Christiana joined a California-based med tech startup where she designed the company’s first successful multi-market consumer campaigns. Christiana remained the company’s sales leader until its acquisition and her exit in 2018. Since co-founding Millennial Clubs, a service and networking organization, in 2016, Christiana has been recognized as a millennial thought leader in technology, culture, and growth strategy by companies, such as Cosign Magazine, Red Bull, and SXSW. 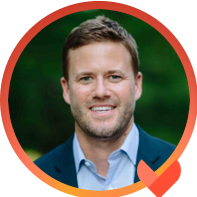 AUSTIN EUDALY
Business Development, Co-Founder
Austin Eudaly is co-founder of Vouch and has led business development and fundraising since the company’s inception. Prior to Vouch, he founded and served as Managing Partner of Gallatin Natural Resources, LLC., a mineral and royalty acquisition firm until 2017. Since Austin’s initial investment of $175K in late 2014, Gallatin has generated revenue of over $10.5M. Prior to Gallatin, Eudaly was Vice President of Acquisitions for Flatiron Energy Partners, LLC. Flatiron deployed over $48M of investment capital across major U.S. shale basins. Austin is a member of the Dallas Petroleum Club and co-founded the annual Rhapsody in Red Charity Ball in Dallas. He graduated in 2006 from Oklahoma State University with a BBA in Marketing. 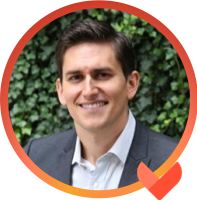 BOBBY SIMPSON
Business Development, Co-Founder
Bobby Simpson is co-founder and COO of Vouch leading company operations and product development for the last three years. In 2012, he obtained a master’s degree in technology and entrepreneurship from the University of Texas at Austin. Upon graduation, Bobby worked in mobile app development until starting an energy services company in 2012. He has led Harbinger to develop business in with oil & gas, renewables, and utility clients in nine states. Bobby has served as board member and president of the New York City chapter of Young Professionals, a non-profit organization. 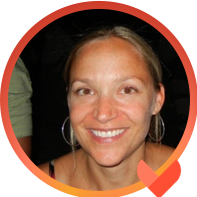 BETH WILSON
Advisor
Beth Wilson has been a visionary in online dating for over 10 years. She was responsible for the entire portfolio of digital and interactive products at Match.com, along with other platforms, including Chemistry.com. During her tenure, Wilson built product roadmaps and launched a completely re-imagined universal and international iOS app for Match.com which received multiple industry awards along the way. Awards such as #5 Top Grossing Apps (ex-games) within 5 months post launch and ‘Bets Design’ by Appy Awards, Social Media category. Now, Wilson serves as the President and Chief Product Officer at Beanstalk Digital, a digital design and marketing firm in Dallas, Texas. 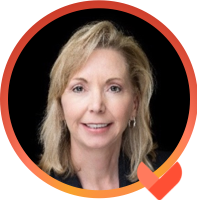 SANDY MARTIN
Advisor
Ms. Sandy Martin is a strategic C-Suite professional with 30+ years leading finance teams and collaborating with operational executives on private/public IPO transactions and spin-offs for premier brands such as Match Group, Pier 1 Imports, Sally Beauty Holdings, Tribune Publishing and Zale Corporation.  Currently, Ms. Martin is an investor relations advisor for public and pre-IPO private companies that need to attract capital, investors or communicate with Wall Street analysts.  She is a current CPA in the state of Texas, has a BBA in Accounting from the University of Texas at Arlington and earned an MBA in Finance from the TCU Neeley School of Business. 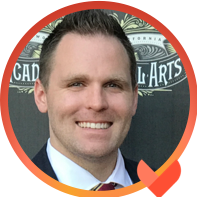 DREW WILLIAMS
Advisor
As Vouch’s advisor, Drew Williams brings immense knowledge and experience pertaining to the mobile and dating app spaces. He joined Tinder in 2014 and helped lead it to becoming the most successful app in the dating industry. Since stepping down as Tinder’s Director of Finance in 2018, Drew has used his industry knowledge and skills to bolster other app startups, including a $50K investment in Vouch. Prior to Tinder, Drew worked for Match.com and Travelocity. He received his BBA in Finance in 2010 from Texas Tech University.