At WOO Sports, we get people off their couches by bringing the games they love to the real world. 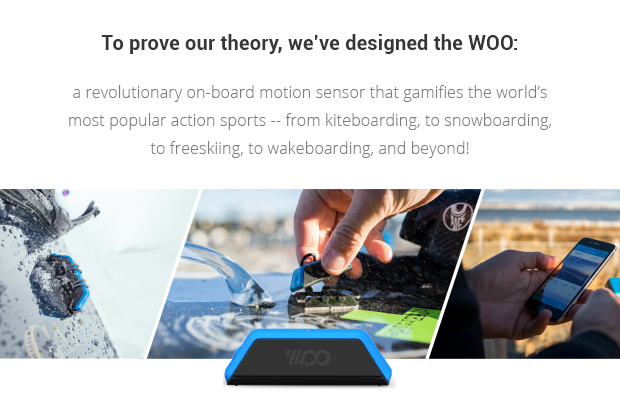 The WOO Sensor is like a game controller. It allows action sports enthusiasts to get in the game.  The WOO clips onto any board, making it possible to precision-record the data behind every jump, spin, and flip for every single session.

The real magic happens in our software. The WOO app transforms riding into an engaging, interactive game on a global scale.

Everyone from first-timers to professionals can challenge their friends and other riders across the world, post their sessions, explore new locations, partake in # challenges, earn badges, and much more -- all while being active and sharing the collective stoke!

People love games.  Reading up on some of the statistical data, you’ll be surprised at the amount of time the average person spends on games – most of the times sitting on a couch.

If you’ve ever doubted the power of games, maybe you caught wind of that worldwide phenomenon where millions of people were actually getting up off their behinds and venturing into the real world on miles-long excursions foraging for funny little things called Pokémons?  With the aid of GPS and motion sensor technologies, the wizards behind Pokémon GO accomplished the seemingly impossible -- they got gamers off their couches and outdoors, participating in, let’s face it, some much-needed physical activity. And gamers were doing it together.

Meanwhile, in the world of action sports, participants face no shortage of fresh air and exercise, yet they lack that essential element of interactivity, engagement and that positive kind of addictiveness of a global game, as part of a community that shares a common passion -- a factor that’s so engrained into gaming worldwide.

There have been enormous strides made with the likes of GoPro and other wearable tech devices enabling folks to better capture, preserve, and share their greatest action sporting moments. But they collectively stop at the level of being mere trackers, or data capturing devices.

At WOO Sports, we’re going even further. We stretch the user experience out to the viral, engaging and addictive elements of games.

Ultimately, we see our platform and game as something that can turn any metric into fiercely loyal engagement, no matter if it’s jumps, steps taken, heart rate, or any metric coming from connected devices.  With that, we plan to move away from transactional, hardware driven revenue, and on to recurring and software driven revenue models.

The first half of our platform begins with the WOO Sensor -- a tiny, machine-learning-powered hardware device that clips to your snowboard, skis, BMX, skates, wakeboard, kiteboard, skateboard, and other sports equipment. The Sensor uses quantified data to track metrics and create mobile games for multiple activities. Key hardware features include: 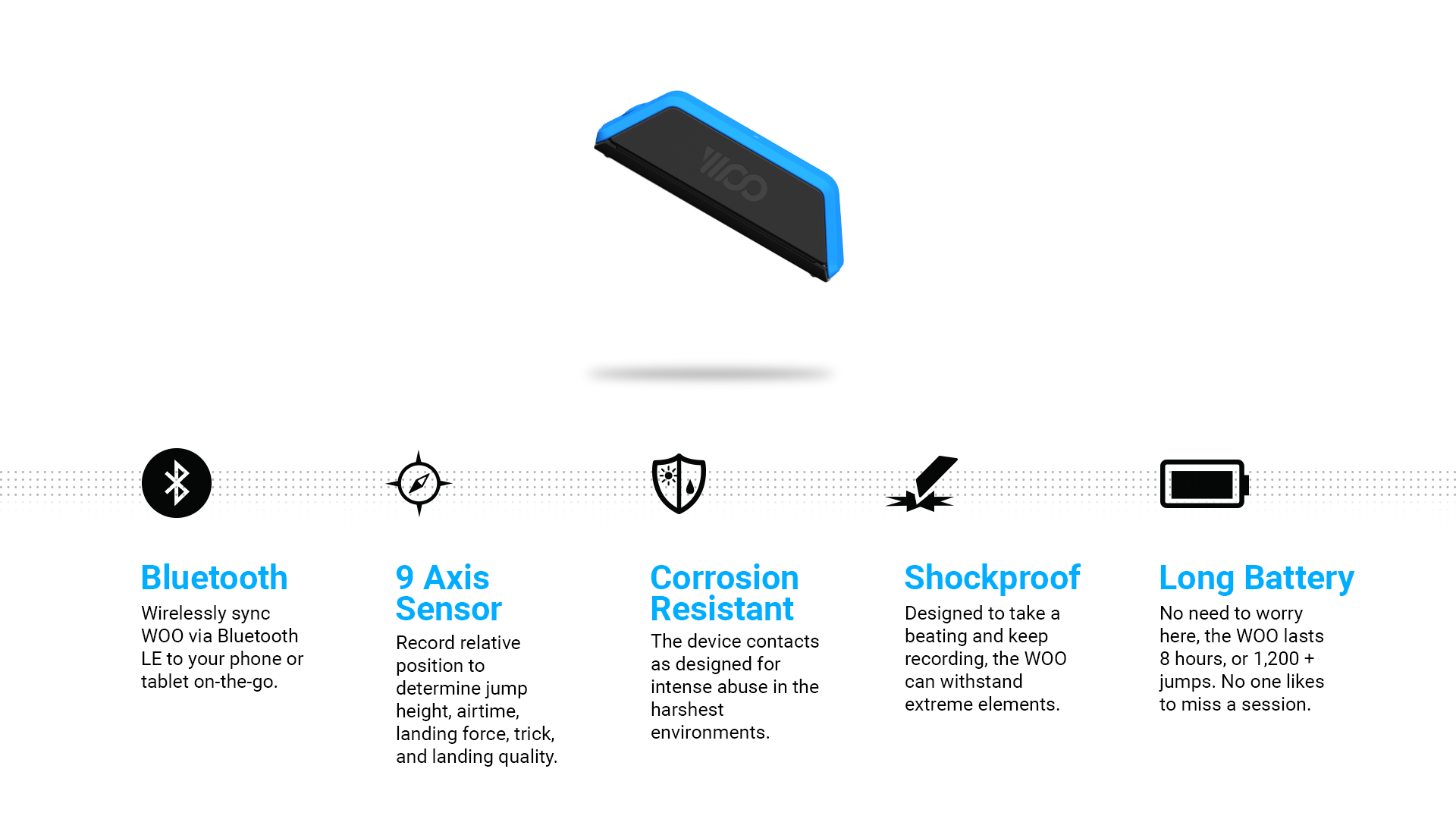 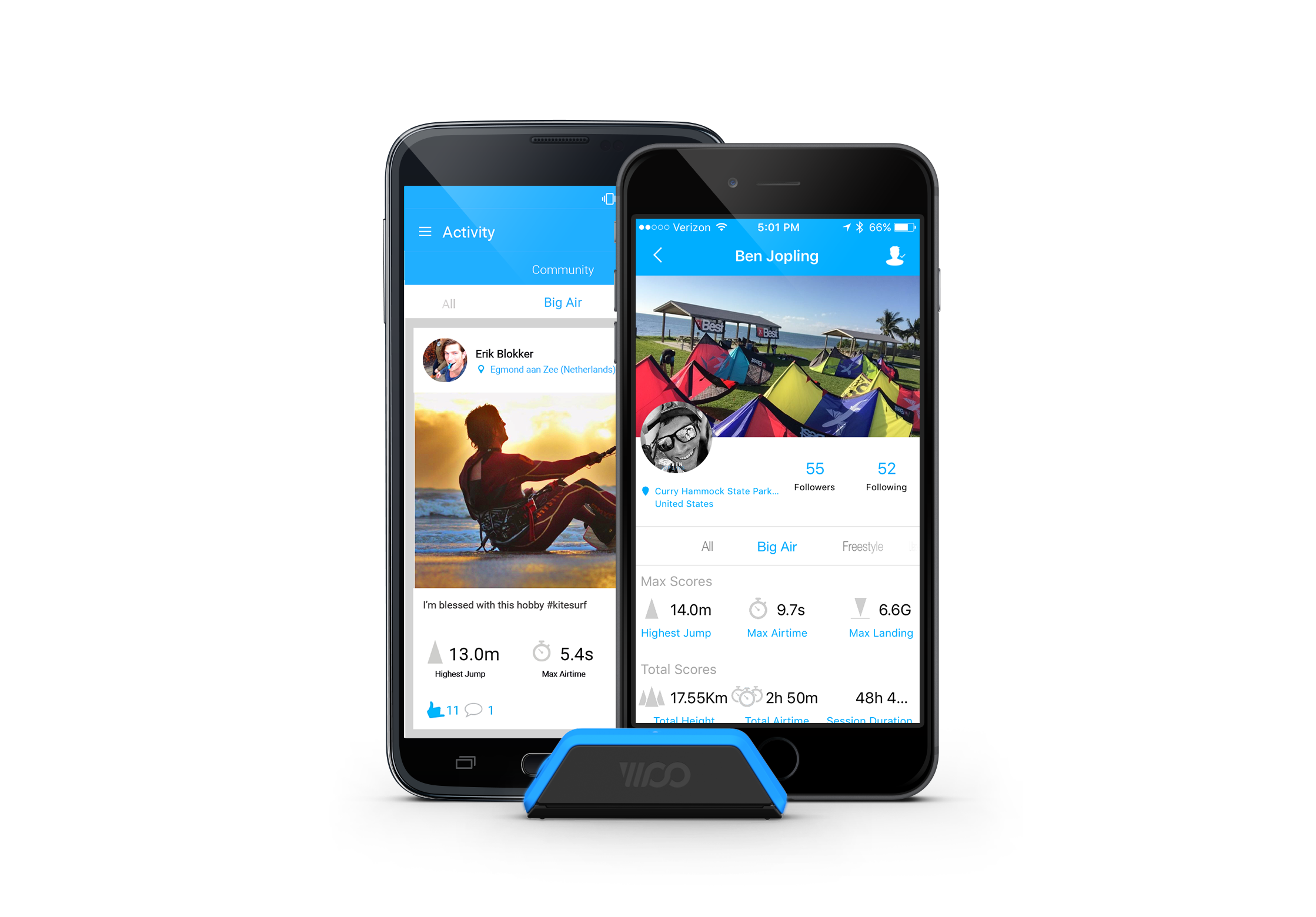 Our Sensors work in perfect harmony with our easy-to-use mobile app that provides users with all the performance details and gamification aspects at the heart of our platform. Key software features include:

Trick Detection
Analyzes the rotation pattern of every trick performed by riders and compares it to the pattern of tricks stored in our “Tricktionary” -- a library of tricks separated by sport that we trained (and continue to train) to recognize without the need for a hardware or app upgrade. 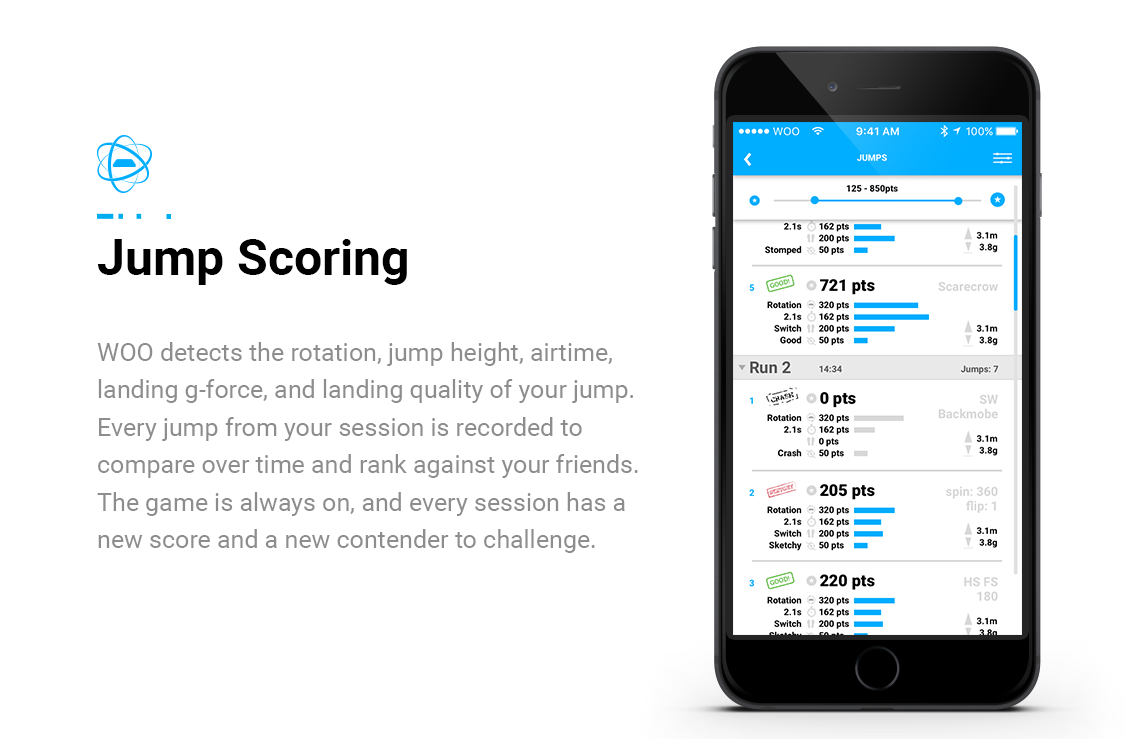 WOO Tricktionary
Get a high score on a specific trick variation and try to complete the WOO Tricktionary. WOO will detect regular vs. switch, heelside vs. toeside, and frontside vs. backside riding positions.

Challenge Friends
Challenge your friends around the world to keep the competitive vibes flowing every day of the week. Follow friends and track all their sessions to see how you stack up. 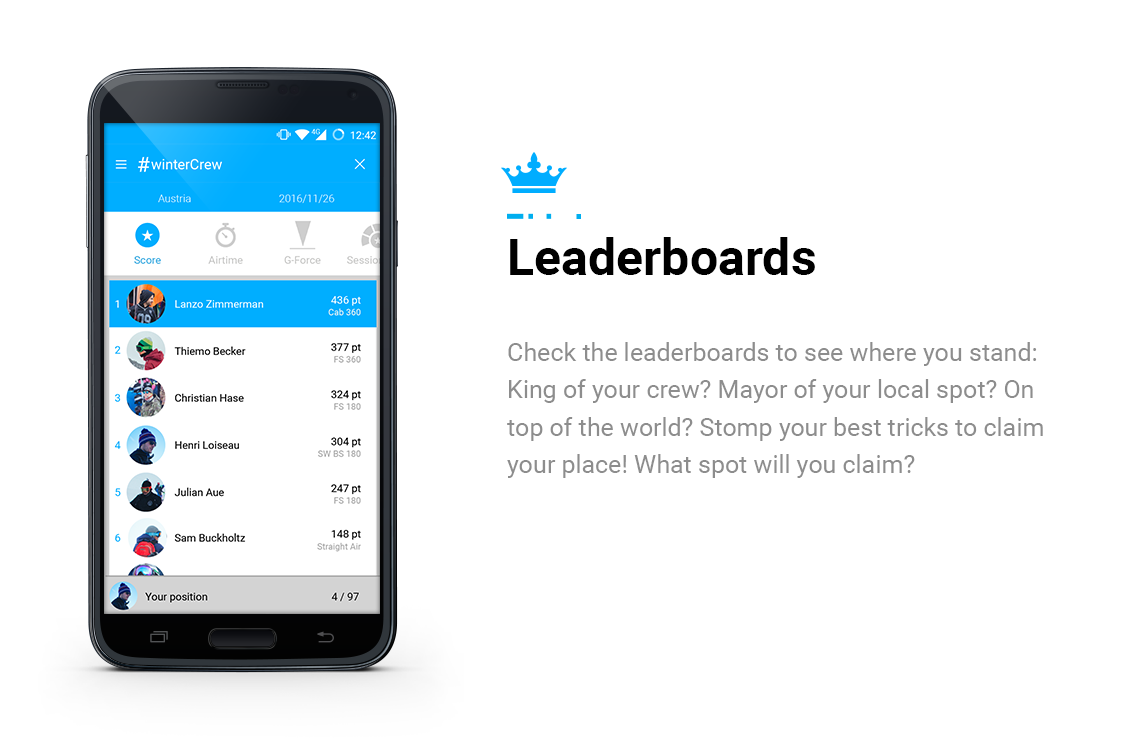 Scoring System
Based upon the difficulty of the trick performed, how big you went, and how well you landed it. We look at a unique combination of height, airtime, landing G-Force, and landing quality to determine the final score. The scoring system is unique for every sport, as is the determination of the landing quality.

It’s our philosophy that people were made to move, to play, and to experience the great outdoors.

That’s exactly why WOO is on a mission to use technology to get people off the couch and away from the TV screen by bringing the addictive elements of a video game into the real world -- making it fun and rewarding to get out on the slopes, waters, mountains, and streets.

So whether your weapon of choice is a kiteboard, snowboard, skis, wakeboard, and everything in-between, WOO enables you to transform it into a game controller.

The bottom line: WOO currently is the ultimate action sports gamification technology for the 21st century that allows...

of all skill levels to connect, interact, and compete from opposite sides of the globe to earn badges and win trophies. Everything from battling for the highest jump, to landing the biggest freestyle trick, to comparing performances and sharing them on the WOO activity feed.

to develop fundamental skills and stay engaged with the sport and build their confidence to progress their abilities.

to more accurately judge competitions with insight into key metrics.

to gain insights into their consumers and reach them with relevant and targeted ads.

to generate a more engaging experience around their ski resort, cable park or trampoline park.

Since we first started shipping units at the beginning of 2015, we’ve sold over 11,000 WOO devices representing over $1.7 million in sales in the kiteboarding market alone! Since then, we’ve been relentlessly grinding, updating, and iterating -- which has led to the release our second generation product in Q3 2016 with plans for a third generation product later this year.  We have launched two more games, Kite Freestyle and Wakeboarding, and are currently in the process of launching our Snowboarding Freestyle and Freeskiing games.

Just a handful of our most notable achievements to date include: 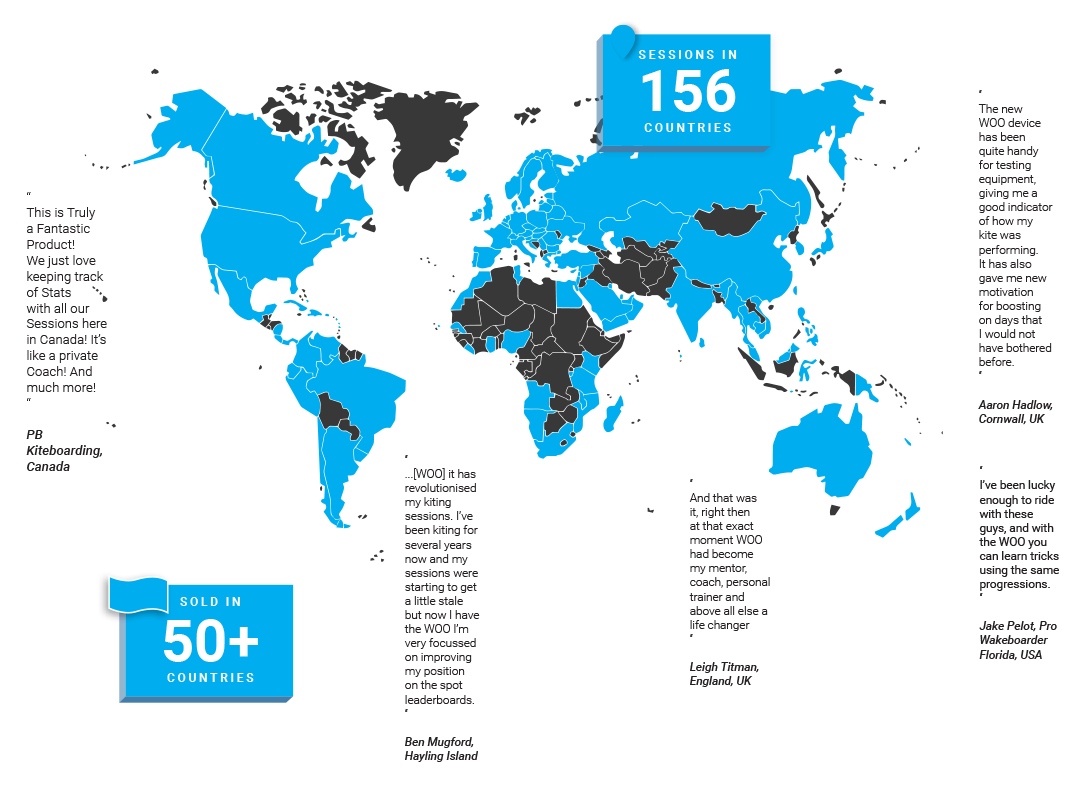 Strategic Partnerships
WOO organized the “Premier League of Kiteboarding” in the UK as well as the global “Champions League.” We’re the official measurement tool for the Red Bull King of the Air competition and for Red Bull Gone With The Wind and we’re partnered with Cabrinha International.

USASA
We signed a deal with the United States of America Snowboard & Freeski Association -- an enormous opportunity giving us widespread exposure at the USASA National Championships, via their website, marketing materials, and through their national office. The Nationals are held over two weeks at Copper Mountain, CO, with over 2,000 participants from all over the country. 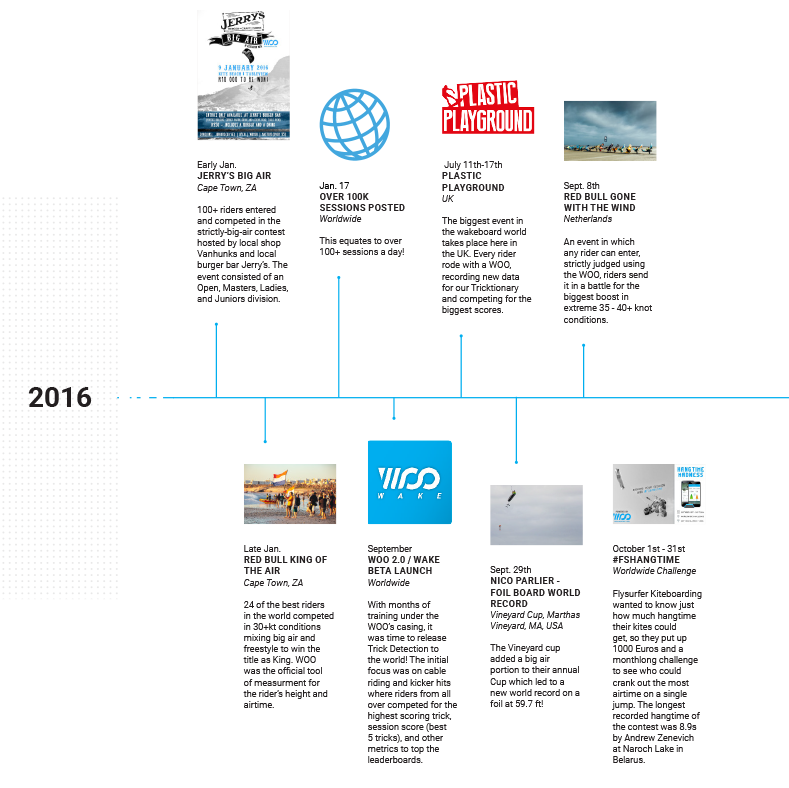 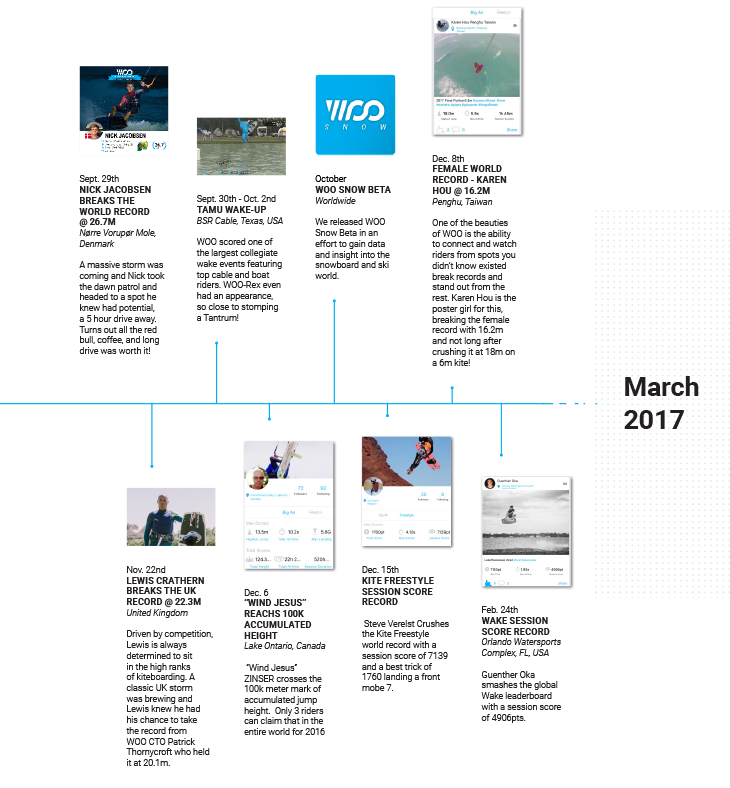 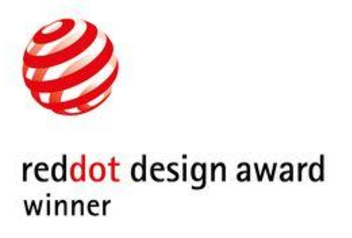 Awards & Recognitions
WOO was the recipient of the 2016 Red Dot Design Award and endorsed by Sir Richard Branson himself.

Patents & IP
We have a trademark registered in the US and EU. Our intellectual property includes an internally-created IP with “Trick Detection Technology.”

Manufacturing & Distribution
WOO is sold in over 50 countries via online direct, Amazon, direct to retail in US/Canada, via independent sales reps in major countries like France, Germany, and UK, and to importers/distributors in remote locations such as Australia, South Africa, and Cambodia.

We’ve had great success with viral marketing where users share their achievements -- if they’ve earned a new badge or a top spot on a leaderboard, for example -- on social media.

Most importantly, after taking over the kiteboarding community by storm, WOO is now moving to much bigger markets, with wakeboarding, freeskiing and snowboarding. Collectively, they are about 20 times bigger than kiteboarding.

Want to learn more about WOO Sports, their technology, and their vision for the future? Make sure to request access to the Business Plan tab of the profile to find out how you can get involved!

WOO Sports is made up of a passionate team of entrepreneurial minds with a global presence united under a common vision. For diehard kiteboarders and action sports athletes with a knack for seeking out major air, we’re actually pretty down to earth.

While our team has lots of fancy “left brain” degrees and skills, we’re a “right brain” company through and through. Our style? Authenticity, honesty, emotion, creativity, joy, and fun.

We’ve assembled our A Team from the best product, software, and engineering talent to ensure that the product we create is as bullet-proof and performance-driven as our customers. 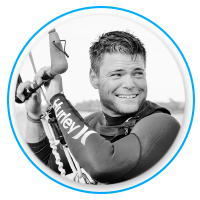 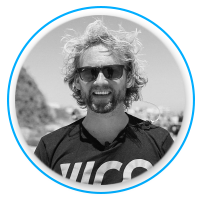 Ytzen Zeilstra | CSO
Born and raised in the Netherlands. Prior to WOO, Ytzen was CFO at a Private Equity firm. 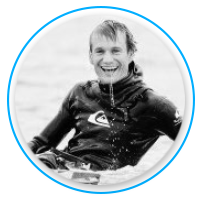 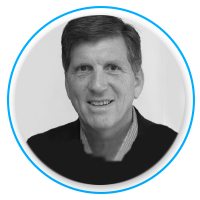