Crowdfunding for One Investor 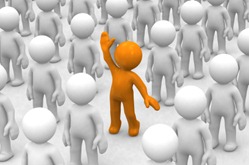 You're Raising? Great, Don't Tell Anyone

Since the days of yore (1933, to be exact) the SEC has mandated that startups are not allowed to publicly solicit investors.  Most people don't even know that.

There's a piece of the soon-to-be-rewritten law that prevents startups from "general solicitation' which is essentially publicly advertising your deal.  The heart of it is this gem that has hamstrung startups for decades:

[You may not use] Any advertisement, article, notice or other communication published in any newspaper, magazine, or similar media or broadcast over television or radio [to solicit investors].

In case it's not clear – that means that you can't advertise the fact that you're raising equity capital.

Crowdfunding is about Reaching Investors (even just one)

The most important piece of the JOBS Act is the re-write of this provision that will enable entrepreneurs to reach out to a much larger base of potential investors using crowdfunding platforms, targeted marketing, and even Twitter.

This important change doesn't mean that a startup has to raise from lots of investors.

Startups of course can raise from lots of investors through a crowdfund, but there are obvious drawbacks, such as having a mob of unsophisticated investors to answer to.

That complaint is based on an assumption that the entrepreneur will blindly accept money from anyone, which can happen, but doesn't mean it will happen all the time.  Entrepreneurs deserve more credit than that.

Preparing for a Party of One

We still have to come back to the point that crowdfunding doesn't automatically equal a huge pool of investors.  The mechanism works well for finding even one.  Frankly finding lots of investors is a huge PITA.

Let's say your startup is raising $50,000, which is a fairly common amount for early stage companies to raise.

Could you have 1,000 investors at $50 each?  Yes.  But finding 1,000 people willing to invest is the hard part, not maximizing the amount that each individual will invest.  As investment amounts get lower, remember that people also have less to gain to make it worthwhile to go through the whole process.

Wait, One Investor isn't a Crowdfund!

Really, It doesn't matter.  If leveraging crowdfunding is the means to find even one great investor that was impossible to find before the JOBS Act, then we've accomplished our goals.

Let's Reset our Expectations of Crowdfunding

Before we all agree on exactly how crowdfunding will work, who will use it, and how investors will react, we should first agree that none of us actually knows – it hasn't actually happened yet at scale.

We do need to understand that startups are finally going to be able to access a much larger market of potential investors than ever before.  With time and experience we will figure out the right offering amounts, the right diligence, and the right size for as startup cap table.

Until then, we're all still learning as we go.