This startup story features Steve Ells, the founder of Chipotle. Ells who graduated from the Culinary Institute of America, dreamed of opening a fine-dining restaurant but ran into the problem most entrepreneurs face; lack of funds. In 1993 he opened Chipotle as a way to make money to fund his fine-dining restaurant. The idea took off and Chipotle with its foil wrapped burritos gained a cult following, propelling the company to over $826 MM in revenue with over 37,000 employees.

How Chipotle Got Started

Ells had attended the University of Colorado and later the Culinary Institute of America. After graduating, he worked as a sous chef at Stars Restaurant before leaving to launch Chipotle in 1993. Then 28, Ells created Chipotle to help him fund a fine-dining restaurant he had dreamed of. The restaurant quickly gained traction  with it’s fast yet quality food service and began to gain a cult following.

Watch the full interview with Chipotle Founder Steve Ells below.

1995: The second store opens using the cash flow of the first restaurant.

1998: McDonald’s invests $360 Million into Chipotle, allowing it to rapidly expand.

2006: Chipotle goes public and the stock rises 100% in the first day.
McDonald’s fully divests from Chipotle.

Chipotle was almost an immediate hit and began seeing profitability within months of launching the first restaurant. Below is a chart that depicts Chipotle’s profit margins vs. other major chains. Despite it’s continued focus on sustainable ingredients, the company has been able to maintain profit margins around 35.9%. 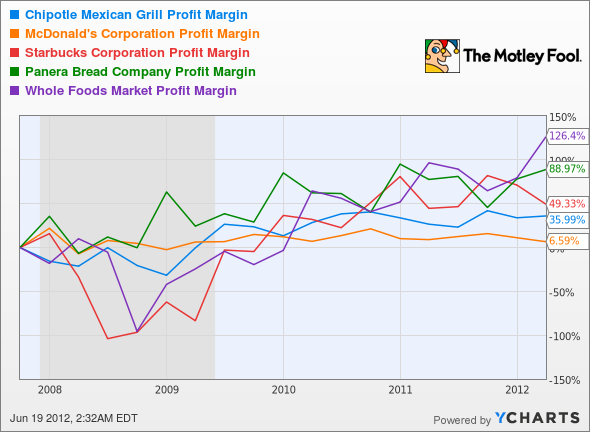 “So many people told me it was not a good idea to a start a restaurant, especially a fast-food restaurant. There was so much wrong with it ; it was too spicy; everything was done by hand, from scratch. Everything was wrong. But that’s why customers liked it; it’s different, in the right way. If you have an idea, just go for it. If everybody is telling you that it’s wrong, maybe that’s an indication that it’s an original idea.” – Interview with the WSJ