Wearable technology is trending on Fundable! The companies below have gotten rave reviews from the media and incredible interest from investors and pre-order backers.

Bia Sport is the first company creating tech-enabled products for the specific needs of active women. The success of their first product — a sleek, easy-to-use multi-sport GPS watch — is proof that the devices currently on the market are not cutting it for female athletes. With over $550,000 in initial pre-sales, there are currently 10,000 people on the Bia Sport GPS waiting list. Their flagship device has received rave reviews from The Huffington Post, Forbes, Mashable, Real Simple, and was dubbed “groundbreaking” by sports-tech authority DCRainmaker. After being accepted into the prestigious Lemnos Labs incubation program, Bia Sport raised $1MM in initial seed funding.

Owlet is an innovative new wearable device helping new parents everywhere rest easy about the health and safety of their babies. The Owlet Smart Sock wirelessly transmits baby’s heart rate, oxygen levels and other important information to parents via smartphone, allowing them to monitor their baby’s vitals from anywhere. With $250,000 in presale revenue from Q4 2014 alone, Owlet has received rave reviews from The Wall Street Journal, Today Show, TechCrunch, among others. The team is currently partnering with researchers at Rutgers University in a study on infant sleep and were recently selected to participate in TechStars Connected Devices Accelerator Program.

Atlas is a wearable device designed to track and identify physical activity. The Atlas wristband can automatically identify exercises, count reps, and organize sets, all with virtually zero user action. Unlike other wearable devices, Atlas can intelligently assess types of motion; even differentiating between a triangle push up and standard pushup! Since launching a few months ago, the Atlas team has raised $629,019 in pre-orders and has been featured in CNN, Men’s Health, Fast Company, and TechCrunch. 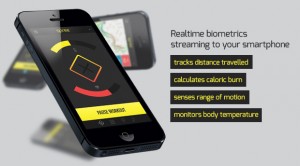 Hothead Technologies has created the Spree fitness headband, which tracks a wider range of biometric information than any other wearable sensor device on the market. Designed to be the first wearable sensor to monitor body temperature in addition to heart rate and movement, Spree notifies you when you’re adequately warmed up and ready to work out, and alerts you if you’re close to overheating. With over 2,000 first units shipped, Hothead technologies has a distribution relationship with Amazon. They were recently featured as one of the “Hottest Private Technology Companies” by JMP Securities.