The Future of Crowdfunding

The Jumpstart Our Business Startups Act (JOBS Act), signed into law by President Obama on April 5, 2012, is a bill aimed at encouraging startup and small business funding by easing key regulatory burdens surrounding fundraising. The bill has 2 major components with huge implications for the future of crowdfunding:

In this chapter, we’ll take an in-depth look at Titles II and III and look forward at how this legislation is revolutionizing the crowdfunding industry.

Title II: Shouting it from the Rooftops with General Solicitation

Before September 23, 2013, general solicitation—publicly advertising investment from the general public—was prohibited for early-stage, private companies. This ban was placed in 1933 with the Securities Act to help prevent fraud and protect would-be investors from misinformation.

However, for the past 80 years, this restriction has made it especially difficult for early-stage entrepreneurs to attract outside investment, limiting their access to seed and growth capital. As a result, public fundraising has been reserved for large, established companies who can afford to IPO and become listed on public stock exchanges.

With the passing of Title II and the lifting of the general solicitation ban, private startups and early-stage businesses can now harness the power of social technology to take their fundraising online to platforms like Fundable, leveraging tools like Facebook and Twitter to get the word out and attract new investment.

Tools that have now become available for companies to use in publicizing their fundraise include:

For small companies and entrepreneurs, especially the many who don’t have an existing network of wealthy and willing friends, family, and potential investors,  the implications of Title II are huge. Companies can now reach a targeted audience of potential investors in just days instead of months,  launching a campaign on  a crowdfunding platform like Fundable that’s already frequented by thousands of potential investors, and then tapping into the power of the social web as a marketing tool.

For information about the Title II rules for potential investors and companies seeking investment, check out this Fundable infographic, see the SEC’s Title II Fact Sheet, or read the Full Title II Rules.

At the moment, only accredited investors—those individuals with a net worth exceeding $1MM or an income exceeding $200K for the past 2 years—are legally permitted to invest in a private company. One of the most anticipated provisions of the JOBS Act is Title III, which will remove this restriction and allow non-accredited investors to invest small amounts in private companies online.

As Title III is implemented, the SEC is placing a number of key limits on non-accredited investment both to ease the rapid growth that this measure will spark, as well as to protect newer investors.

Here are the basics:

Refer to this handy chart for a quick summary of what you can invest under Title III: 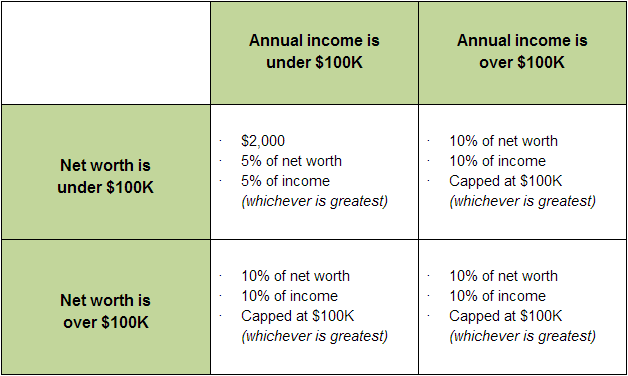 There are also several new restrictions and requirements placed on companies raising funds under Title III. Companies must:

Big Changes for the Crowdfunding Industry

The implementation of Title III will skyrocket the number of available investors in the U.S. from 3.4MM to over 233.7MM, with an estimated combined net worth of over $50 Trillion.

One of the biggest implications of Title III is the leveling effect it will have on the fundraising landscape. Individuals will have more opportunity to invest or solicit early-stage funds, regardless of their personal wealth of network of potential investors.

We’ll start to see a shifting of capital from the venture capital market, which is estimated at $30B, to the critical mass of non-accredited investors. For the first time in 80 years, millions of Americans will be allowed to invest in early-stage companies, bringing to bear a collective buying power that could balloon the investment market to as much as $300B.

For more about where startup funding comes from today, check out this Fundable infographic, created in collaboration with Empact and Entrepreneur.com. Also, be sure to check the Fundable Blog for any updates on the ongoing implementation of the JOBS Act.

General Solicitation – Publicly advertising investment from the general public through traditional and emerging channels, including email marketing, public speaking events, social media campaigning, or creating a public profile on a crowdfunding site like Fundable. The 80-year ban on general solicitation was lifted on September 23, 2013 under Title II of the JOBS Act.

Accredited Investor – Individuals with a net worth exceeding $1MM or an income exceeding $200K for the past 2 years. Currently, only accredited investors, a group comprised of some 3.4MM Americans, are legally allowed to invest in private companies in the U.S. This restriction will be lifted under Title III of the JOBS Act, opening up private investment to non-accredited investors.

In the next chapter, we’ll look at some of the things that make crowdfunding unique as a fundraising method and some of the advantages it holds over traditional business financing.