Learn from the Best

Since Fundable got its start in April 2012, we’ve helped hundreds of startups raise tens of millions of dollars, helping turn prototypes into products and ideas into successful businesses. Though these successful startups run the gamut from mobile apps to fashion lines to restaurants to craft breweries, there are a few universal lessons that can apply to any company looking to jump into crowdfunding. Now, it’s time to learn some lessons from successful crowdfunding campaigns. 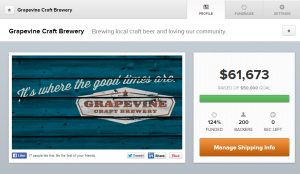 Last year alone, the craft brewing industry grew 15%, with backers and investors flocking to support new and innovative all across the country.  Grapevine Craft Brewery of Grapevine, TX was no exception, recently closing an extremely successful rewards campaign and setting a crowdfunding record with an incredible $61,673 in pledged support.

A major key to Grapvine’s success has been their ability to bring together an entire community around their mission: serving Texas beer made with Texas pride and a pinch of community-focused philanthropy.

Grapevine prides itself on creating local, classic brews that not only satisfy its thirsty customers, but also continuously give back to the community. Even at the early stage of his business, Founder Gary Humble committed to donate 5% of quarterly profits to GRACE, a local non-profit that serves under-resourced families and children. Not only did Grapevine itself commit to give back to GRACE, but it also rallied several other companies and community organizations to offer GRACE their own matching grants if Grapevine met its $50k goal. With more than 200 local backers and a groundswell of community support, they quickly exceeded that goal and broke ground on the flagship Grapevine Craft Brewery. 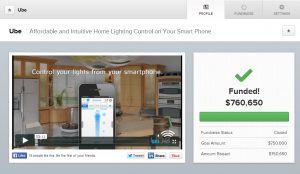 In the last chapter, we looked at the importance of social proof and early traction. People are generally risk-averse and like to hedge their bets by waiting for someone else to take the first leap into a new investment opportunity. Once investors see this critical social proof—whether in the form of pre-orders, favorable press coverage, or first-mover investment, they’re much more likely to see your company as a safer bet and be willing to invest. What’s great about the traction that follows is that it has a snowball effect—the more backers, pre-orders, investors, or press coverage you have as you launch a crowdfunding campaign, the more will follow.

Austin, TX-based Ube is an excellent example of this concept. Ube’s core idea is simple, though powerful:  allow people to control and monitor their electricity with their smartphone from anywhere in the world. Their line of Wi-Fi enabled Smart Dimmers, Smart Plugs and Smart Outlets makes lighting and appliance control easy and affordable.

Ube kicked off its campaign on Fundable with a great deal of momentum, enticing backers to get on board and commit over $935k, helping Ube surpass its funding goal and expand the round to accommodate interested investors. Only a few months after launching in March 2013, Ube had brought in $380k in pre-orders, selling over 5,000 smart power units to savvy homeowners and businesses across the country. It’s been hailed as a million-dollar idea by Connected World, and called “brilliant” by outlets such as TechCrunch, VentureBeat and GigaOm. The revolutionary light system also received the 2012 Demo Startup People’s Choice Award.

The lesson is clear—your first backers and advocates are key in setting the pace for the fundraise that follows. 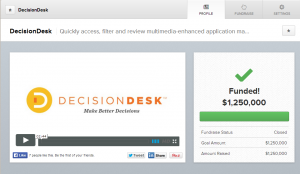 Lesson learned: Know your best-fit investors and target your pitch.

In April 2013, DecisionDesk closed a $1.25MM round on Fundable, offering its customers an innovative application tracking system that simplifies complicated admissions and recruitment processes. By giving recruiters a streamlined way to tap into a global talent pool, review application data, distribute it to internal reviewers, and inform their decisions with reporting and analytics, Decision Desk gives organizations the tools they need to make better and faster recruiting decisions.

During its Fundable campaign, the DecisionDesk team also received a $750k loan from the Innovation Ohio Fund. In targeting these additional funds alongside their equity campaign, DecisionDesk Founder John Knific stressed the importance of determining specifically what investors and loan administrators are looking for in their investment and tailoring your approach.

“Each group will have specific criteria,” said Knific. “The Innovation Ohio Fund were looking for companies that are at break-even, have high-growth technology, and will be scaling their businesses in Ohio. DecisionDesk is in a unique position, having just raised an angel round. As an early-stage SaaS company, over a third of our operating expenses are software development, which makes the loan a great fit.”

What Knific is saying here doesn’t just apply only to going after State funding—it applies to any startup looking to raise money through rewards or equity crowdfunding. If you’re just starting out, take the time to learn who your customers or investors will be and learn their persona inside and out. Tailor your campaign rewards to them. Craft your pitch to them. Seek out additional funding opportunities for the kinds of businesses they’re looking to back. Investors are never “one size fits all”—your fundraising approach shouldn’t be, either. 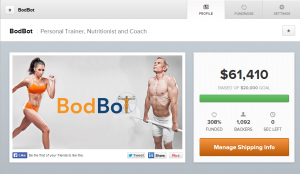 Lesson learned: Tap into your existing customer base for support, and have a plan for how to do it.

BodBot is a perfect example of how to shape your product with input from your earliest customers, build a loyal fan base, spread awareness, and tap into that existing base to close an extremely successful crowdfunding campaign.

For several years, Co-Founders Eddie Laux and Sergio Prado worked day, night and weekend to build the engines to support both the training and nutrition recommendation systems, and a host of other web and mobile tools that that became the foundation for BodBot. After an alpha release in late 2012, they saw their user base explode from a few friends-and-family testers to over 100k users in a matter of months.

When BodBot was ready to unveil its mobile app and other new features with a rewards raise on Fundable in early 2013, they turned to their existing following for support and exposure.  By assessing their customer base and putting together a plan for where, when, and how to reach them, they raised over $21k—exceeding their $20k campaign goal—from 458 backers in only a week. They quickly went on to raise over $61k before closing the round!

As you look at the wide variety of companies who have been successful using Fundable’s crowdfunding platform, you may think the things that got them there don’t apply to your startup. But remember this—even if the businesses in the examples above don’t look anything like yours, the lessons are universal. Know your target investor. Look to your community for local support. Social proof and early traction makes all the difference for what follows after. Appeal to your existing fan base for input and support, and do it with a plan in mind.

There’s a wealth of helpful information and resources out there for anyone looking to raise money through crowdfunding, but we know it can be a lot to navigate. In the next chapter, we’ve gathered our favorites for you to use in planning your campaign.